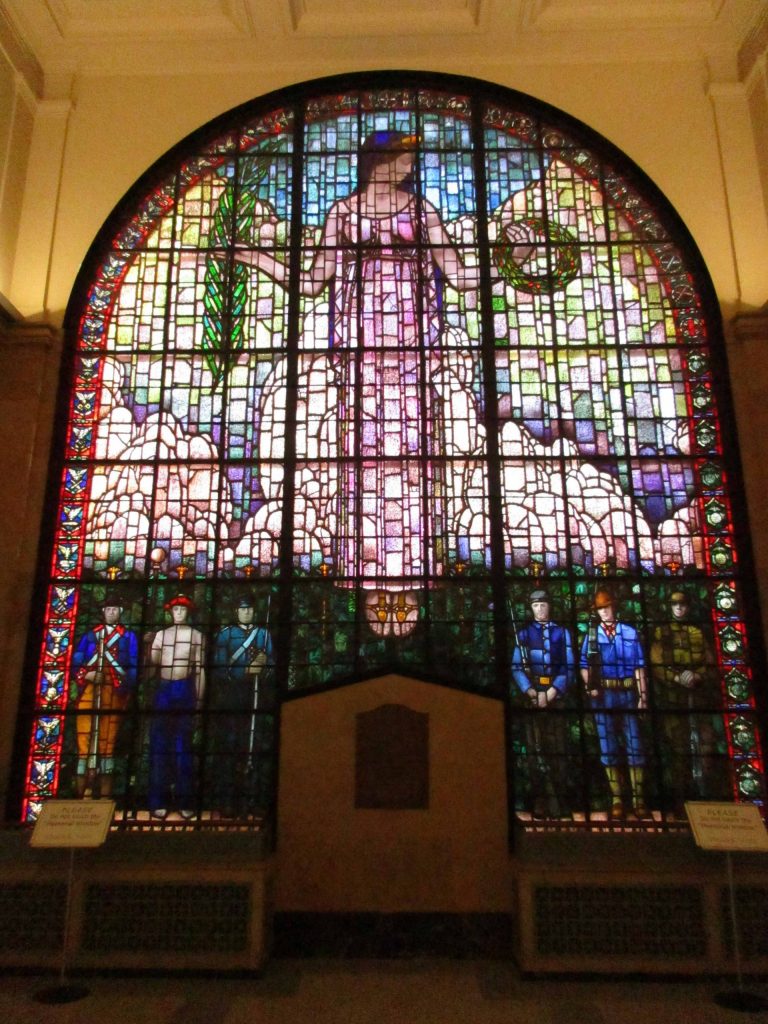 Stained glass is such a striking artform. In the house of my wildest dreams, every window would have colorful glass. While stained glass is de facto in many churches, our public spaces also deserve this kind of beauty. Which is why I’m in love with the 16-foot-high stained glass window at the Veterans Memorial Building.

At 20 by 24 feet, you have to see this window in person to get a sense of its scale. It contains 57 window panels and over 9,000 pieces of glass (1). The color gradients are what impress me the most.

The piece is dominated by a robed female figure. She is “said to represent the ‘Republic’.  Draped over her head is a blue mourning veil, her floating body surrounded by clouds. In her right hand, she holds the palm branch of peace; in her left, the laurel wreath of victory” (2). 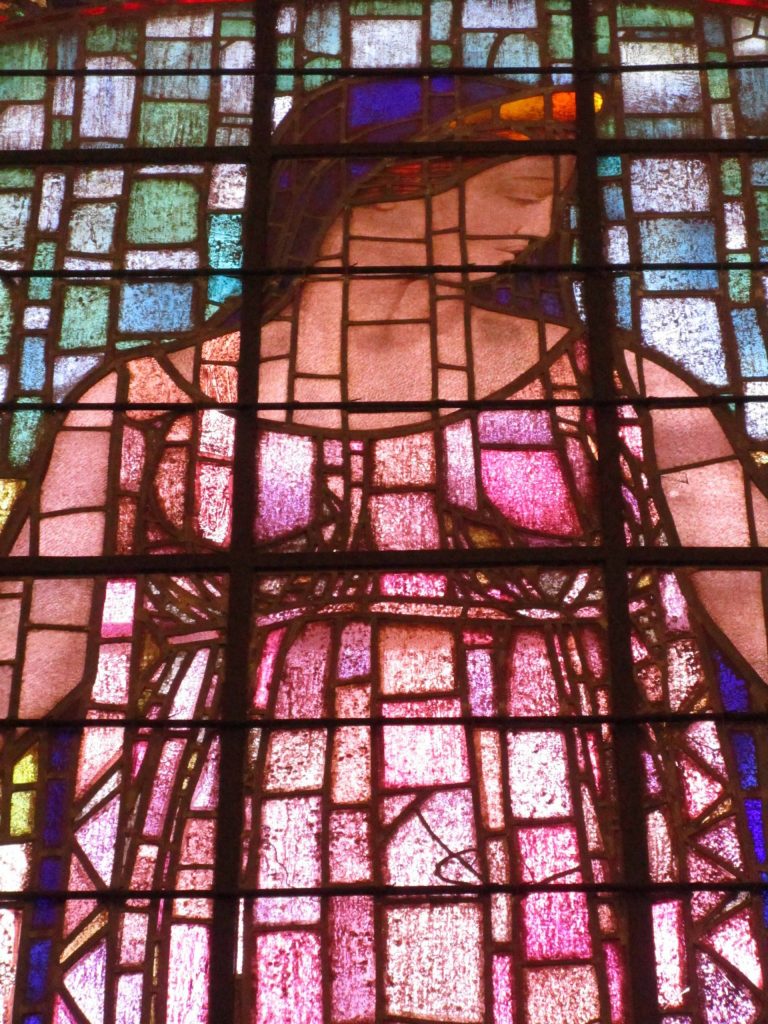 The base is flanked by two sets of soldiers in private uniforms from the Revolutionary War, War of 1812, Mexican War, Civil War, Spanish-American War and the First World War (2). 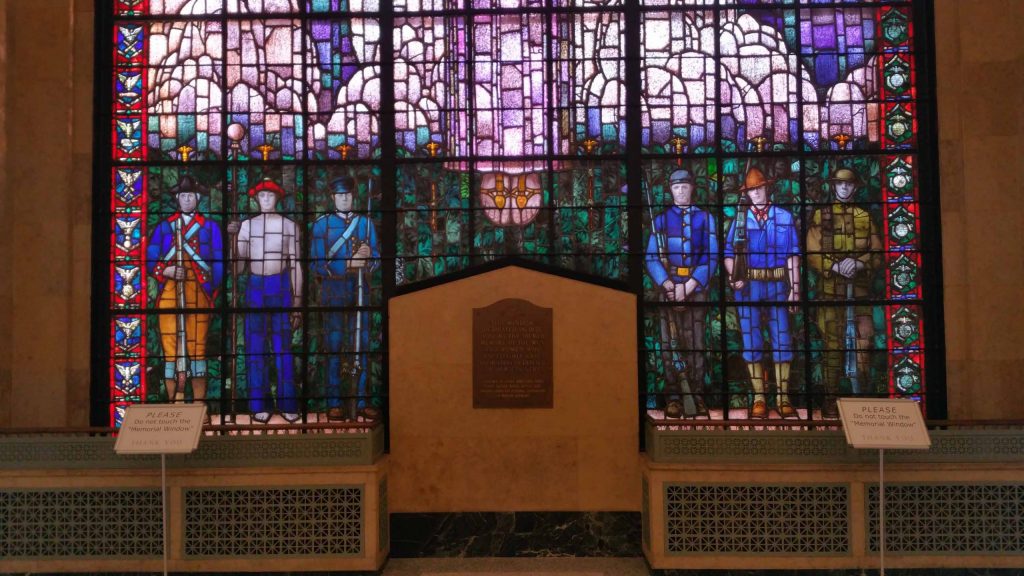 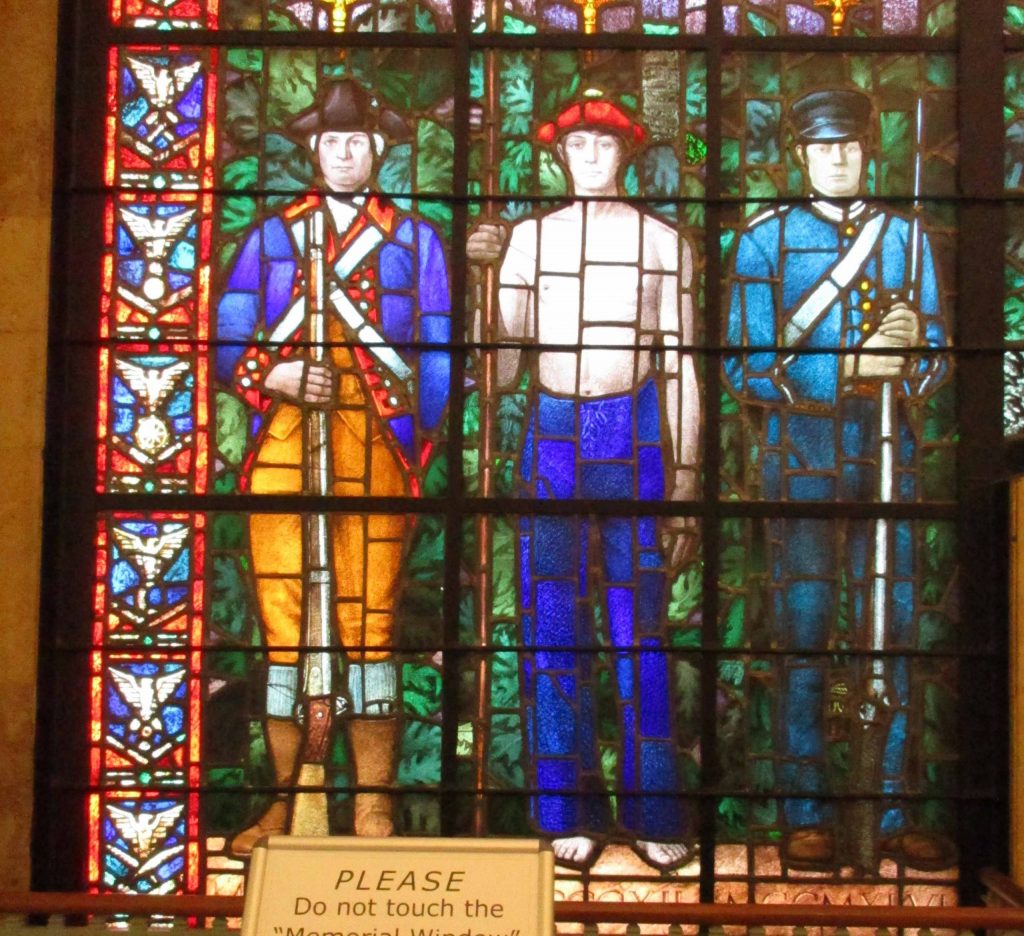 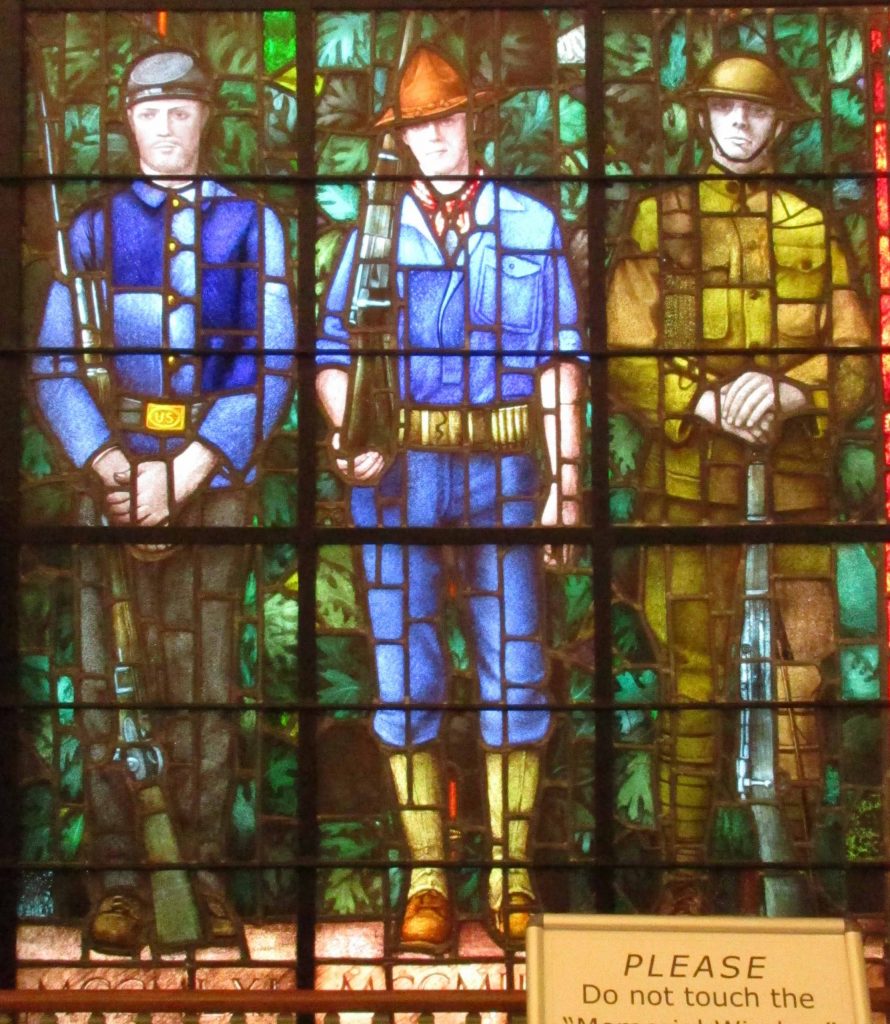 Designed by our very own Grant Wood, the project took two years to complete. Because this was Wood’s first foray into the glass medium, “he spent more than a year in Germany directing the window’s construction and learning the craft” (3). Like any good artist of his period, Wood traveled to Europe multiple times (in fact, this article argues that his trip to Germany, not France, had a greater influence on his style). 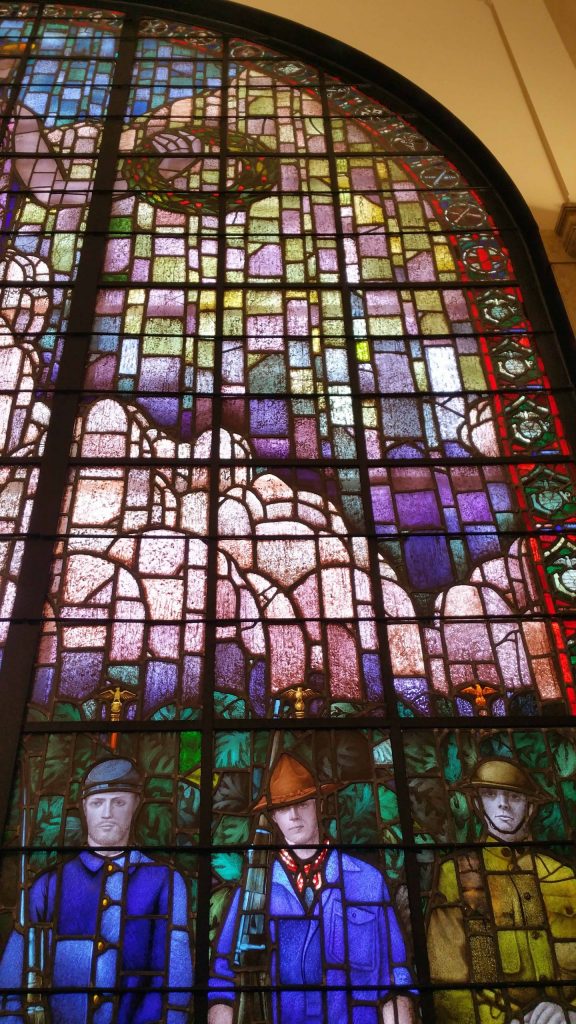 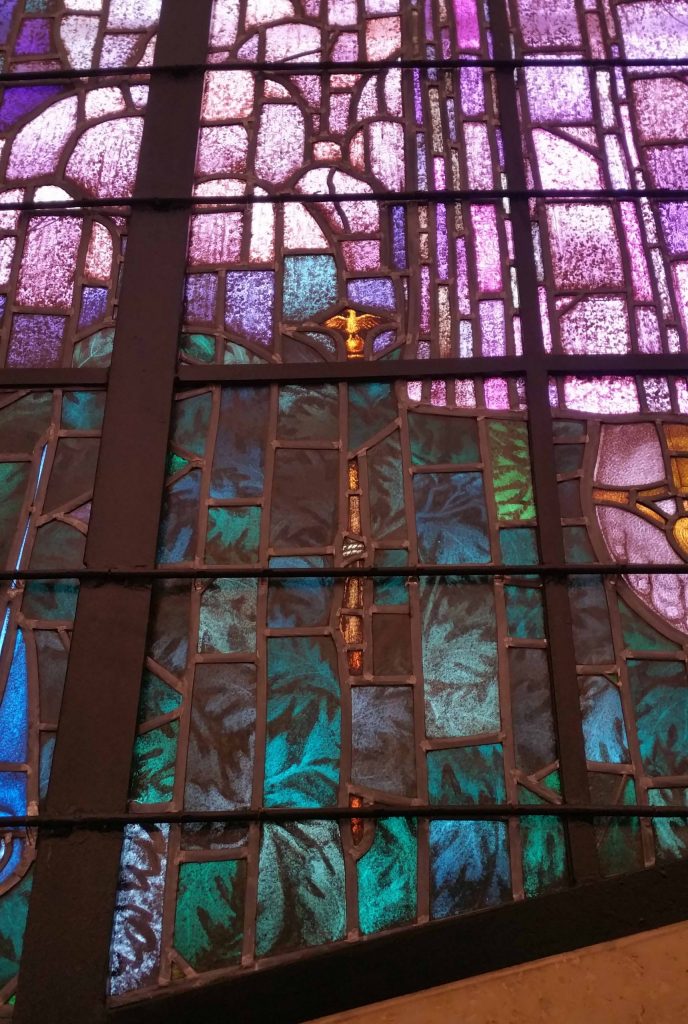 Everyone knows American Gothic. This window uses the same Renaissance techniques Grant employs in his portraits: hyper-realistic faces, detailed backgrounds, and strong colors. In fact, he first drew the window out to scale (the paper copy is now in possession of the Cedar Rapids Art Museum).

Buildings are storytellers. To my modern eyes, Wood’s window is a perfectly patriotic salute. So I was amused to find that the installation caused quite a bit of political stir. The local chapter of the Daughters of the Revolution (DAR) took ire with the fact that it was made in Germany (3). Remember this was the late 1920s, and WWI had only ended a decade earlier. Apparently Wood clapped back in true Midwest fashion by painting a trio of severe-looking DAR matrons. 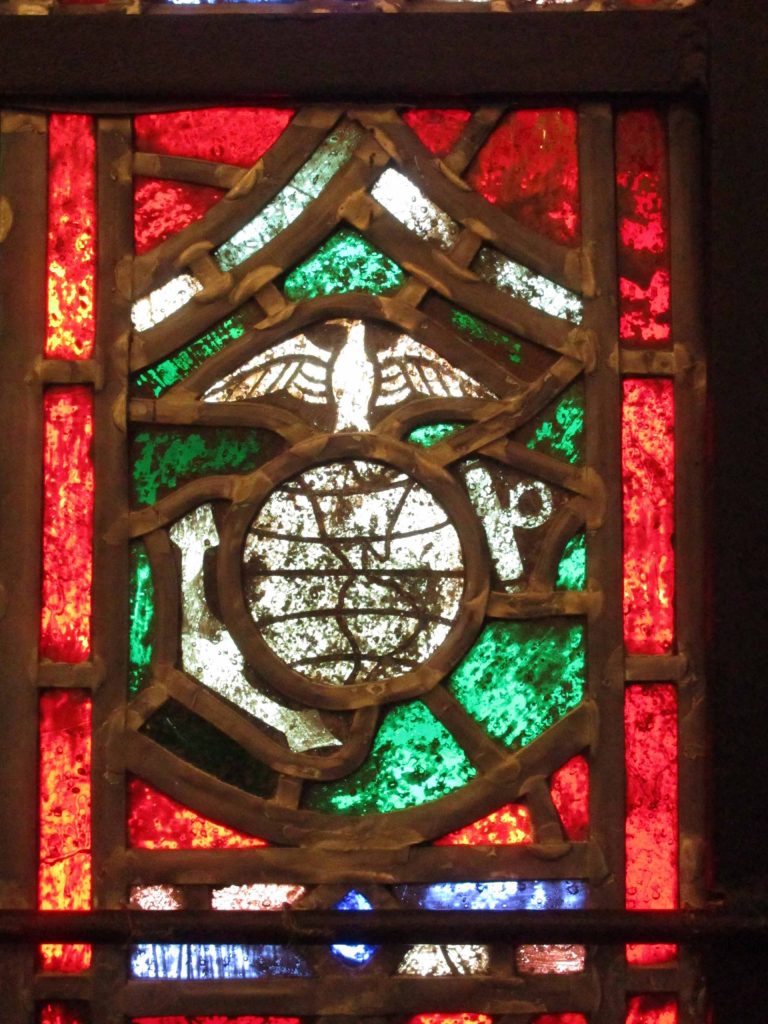 The memorial window was nearly lost in the 2008 Flood. “Even though the roiling river didn’t actually reach the stained glass, uncontrolled atmospheric changes indoors and out sent more than 100 cracks rippling through the one-of-a-kind window in the months following the flood” (3). Now expertly restored, the window has protected frames that will ensure it lasts for another 100 years. 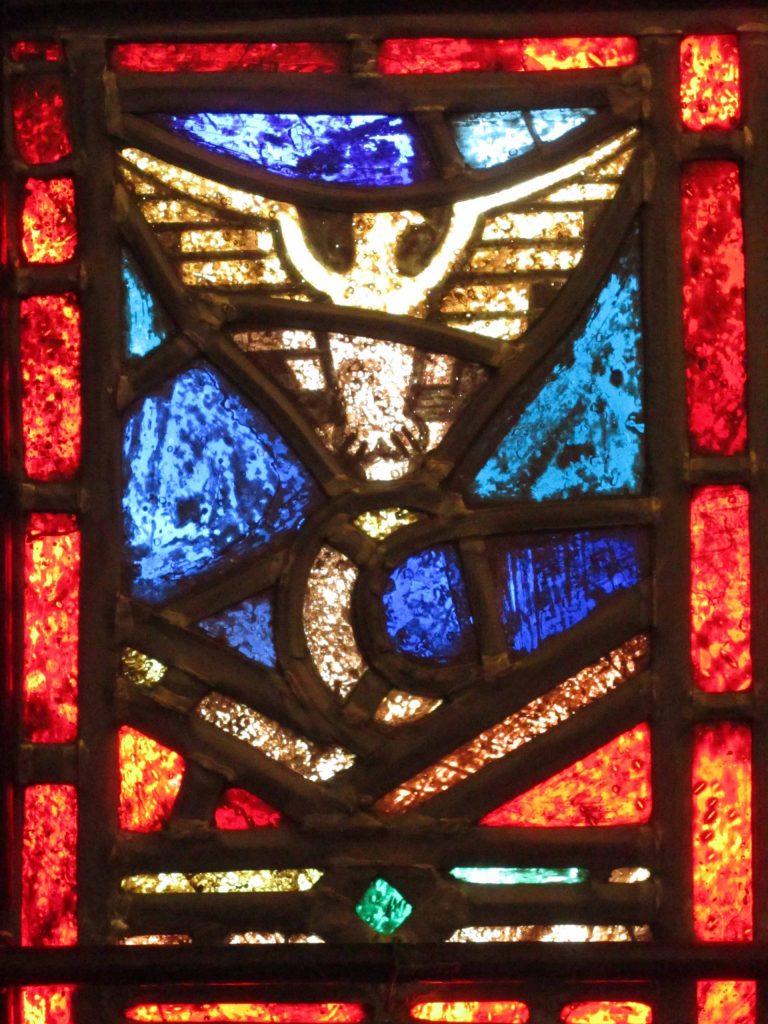 Veterans Memorial Building is completely free to visit and open to the public during M-F business hours – go in and see this marvelous window for yourself! 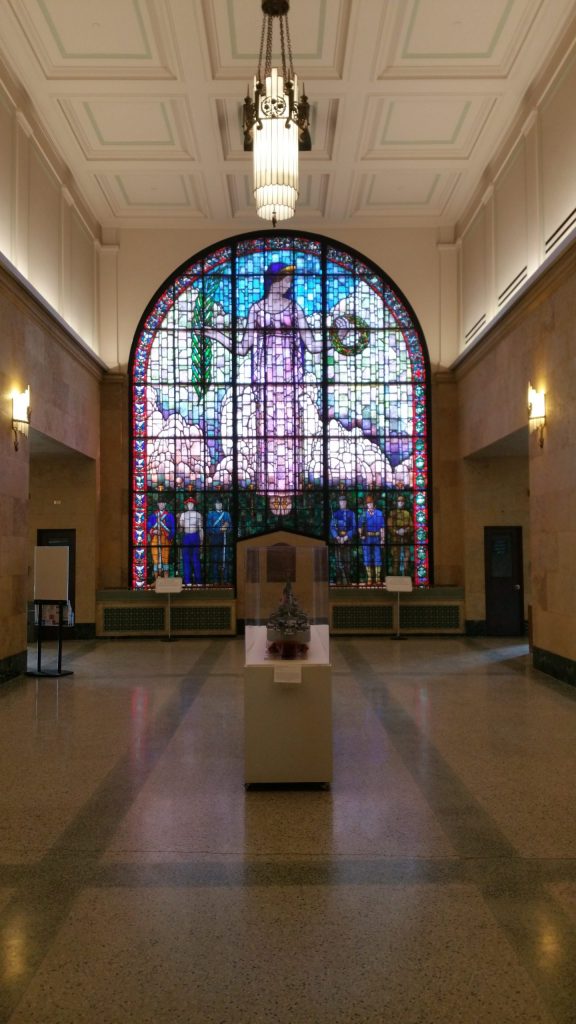 Special thank you to Teri Van Dorston, Assistant Director of Veterans Memorial Commission & Building, for giving me an extended tour and sharing her wonderful knowledge!

All photos personal except for the images of American Gothic and Women with Plants that I blatantly stole off the internet. 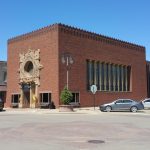 The Brilliance of Sullivan’s Jewel Box Bank in GrinnellUncategorized 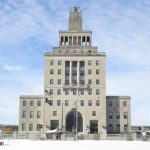