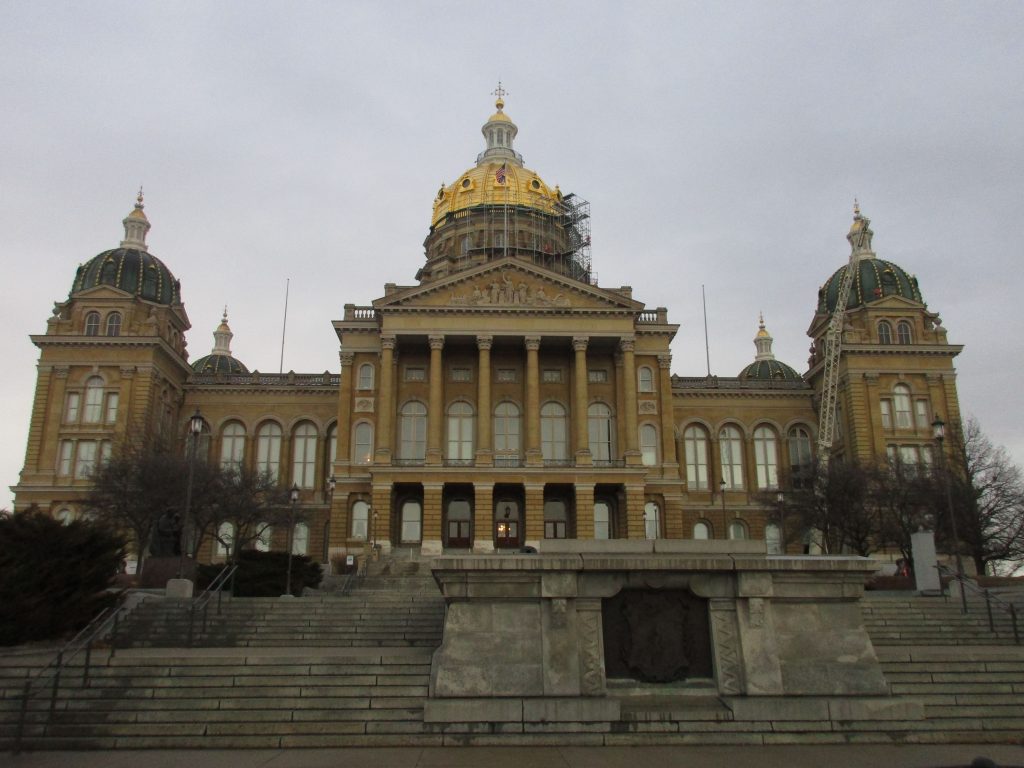 It always floors me whenever I learn a fellow Iowan hasn’t visited our state capitol.

The Iowa State Capitol is a luscious building, and I don’t use that word lightly! Its resplendent exterior and dazzling interior defy stereotypes about Midwesterners being humble and down-to-earth. This building is designed to make your jaw drop.

The Senate and House of Representative Chambers

State capitol architecture from the 1800s is distinct from the neoclassical style that is the standard for U.S. federal buildings. Neoclassical architecture uses Greek and Roman designs to convey austerity, power, and grandeur. Notable examples include The White House, U.S. Supreme Court, and both the Lincoln and Jefferson Memorials.

But the Iowa State Capitol was fashioned under the influence of Renaissance Revival, which looks to 15th century Italy for inspiration. This is a common architectural style for many public buildings in the 19th century. 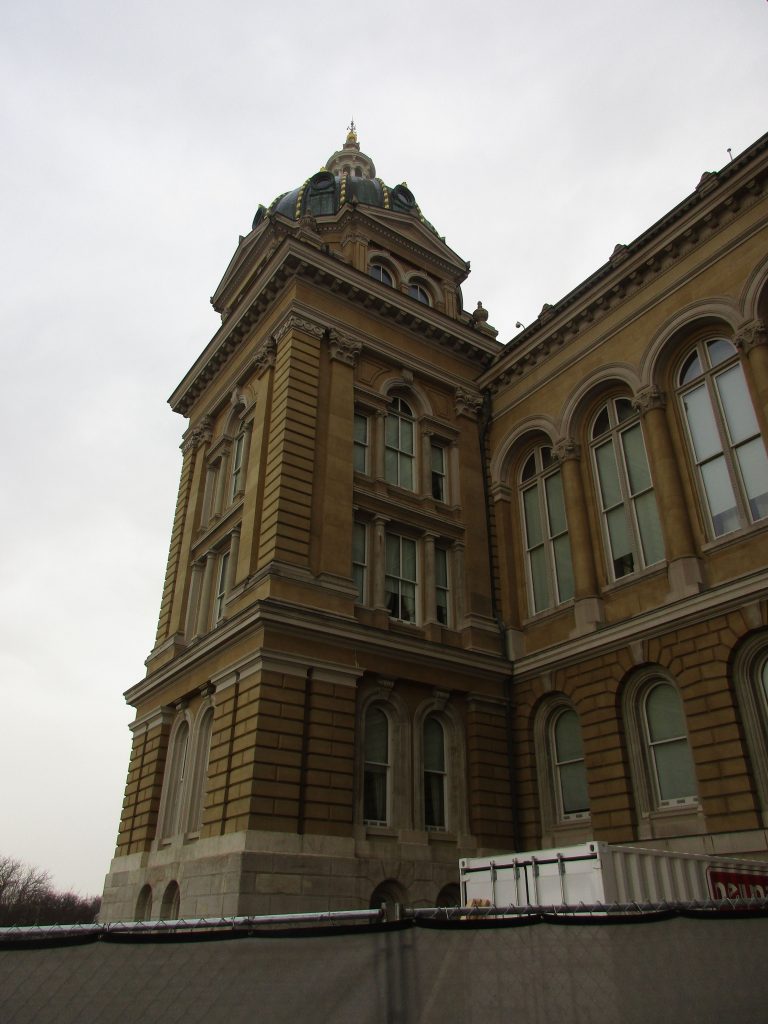 It took 15 years to complete the Iowa State Capitol, which was finished in 1886. Just think about that for a second. In the late 1880s, construction techniques relied on horse-drawn carriages, physical labor, and steam-powered cranes. The capitol’s construction period also spans the Civil War, which I haven’t verified but strongly suspect created delays due to manpower and material shortages (For those interested in monuments, the grounds are filled with Civil War statutes and memorials). Our state was also very young, having been established for a mere 25 years at the start of construction. 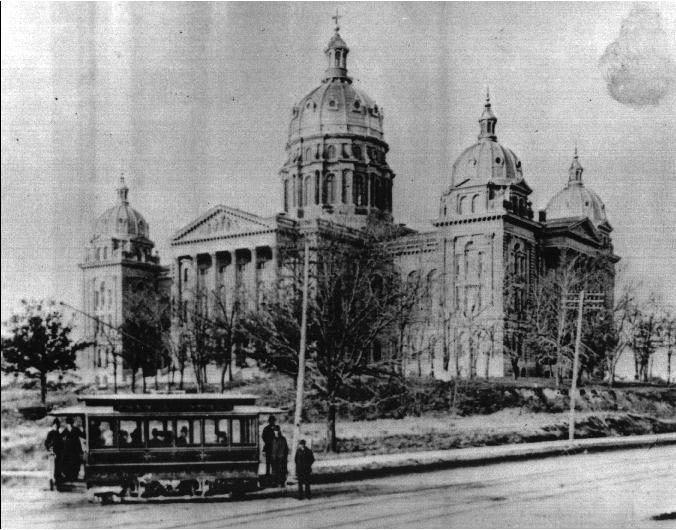 Credit to The Iowa Legislature Archives

As with any “neo” style, Renaissance Revival is a mishmash of ideas borrowed from multiple time periods. Think of it like fusion cooking but from different eras rather than different cultures. Grab a Corinthian column, sprinkle in some allegorical pediments, and liberally apply mosaics as desired. 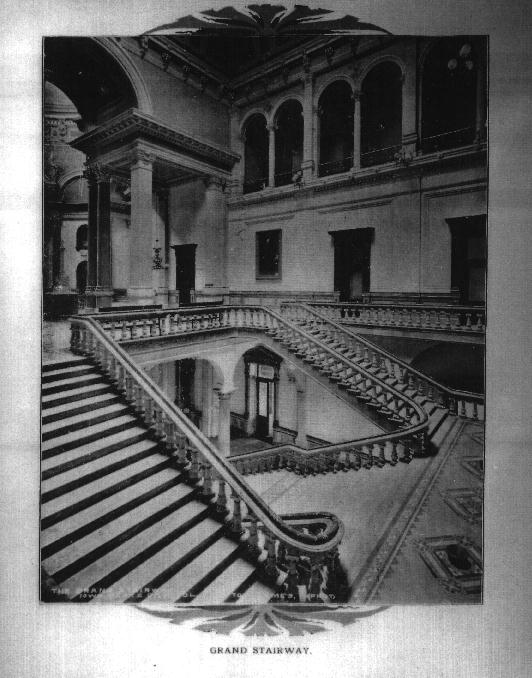 Credit to The Iowa Legislature Archives

The Iowa State Capitol is positioned on a tall hill, with modern downtown buildings wisely placed across the river so there is an unobstructed view of this landmark. You cannot miss it as you drive along Interstate 235.

Alas, our capitol is not the only one in the lower 48 to sport a gold dome. 10 other capitols from Boston, Trenton, and Concord to Lincoln, Denver, and Cheyenne use whisper-thin sheets of 23-carat gold to adorn their building crowns. Ours is undergoing a significant renovation to repair structural issues at present but thankfully doesn’t need regilding at this time.1 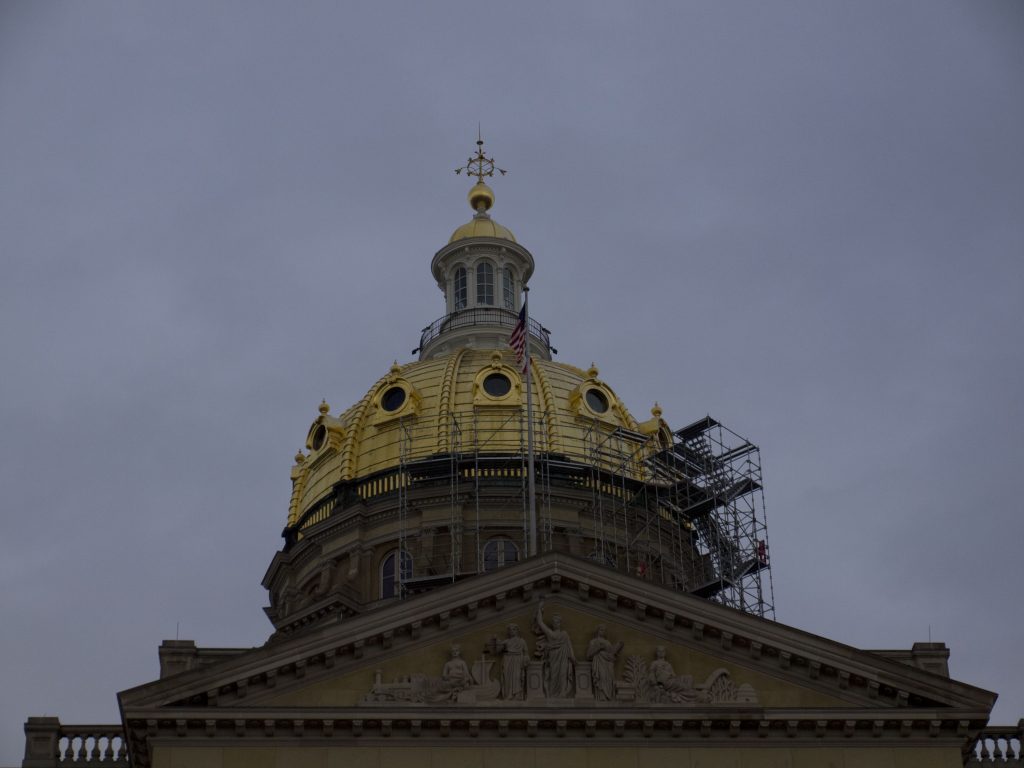 I have visited the capitol numerous times as an elementary student, high schooler, and adult. It is magical because you get to experience time travel. These public treasures have been modernized in the least visually intrusive way to allow for mechanical and accessibility updates. 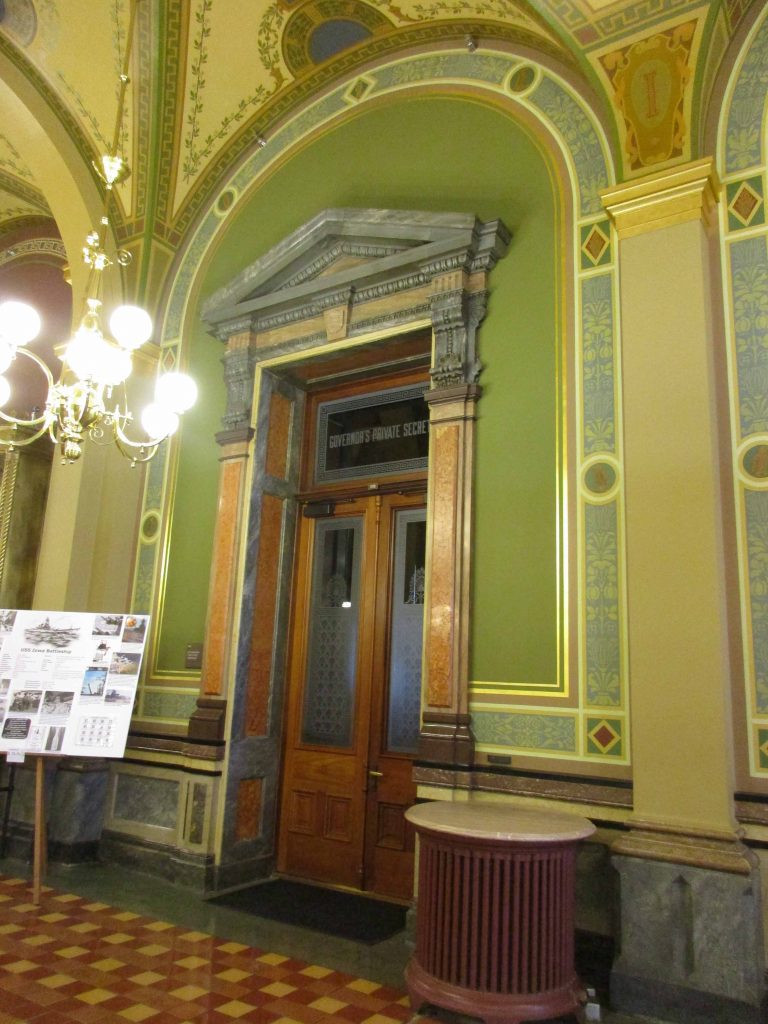 But thankfully no one ever had the gall to rip out frescos because they weren’t “in vogue” any more. No one had the audacity to get rid of the brass fixtures. No one thought it was wise to paint over the stencil work in favor of white walls. 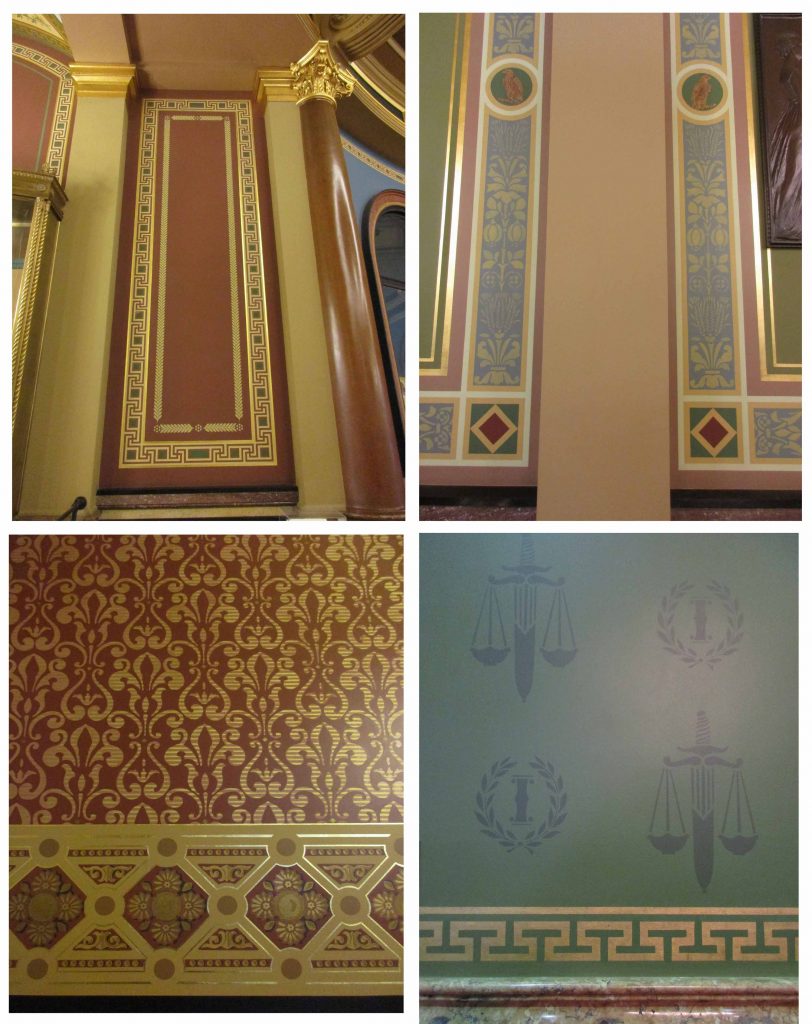 You can spend hours in this building because every surface begs to be studied and appreciated. There are entire coffee table books devoted to every handcrafted detail but here are the main highlights:

It is the only five-domed capitol in the country. 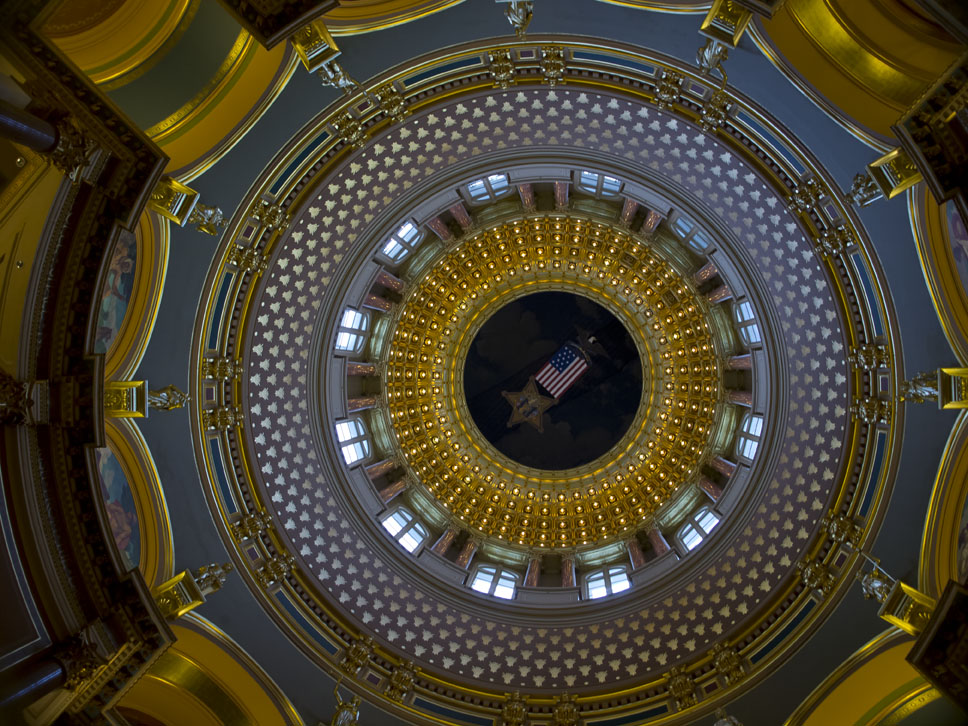 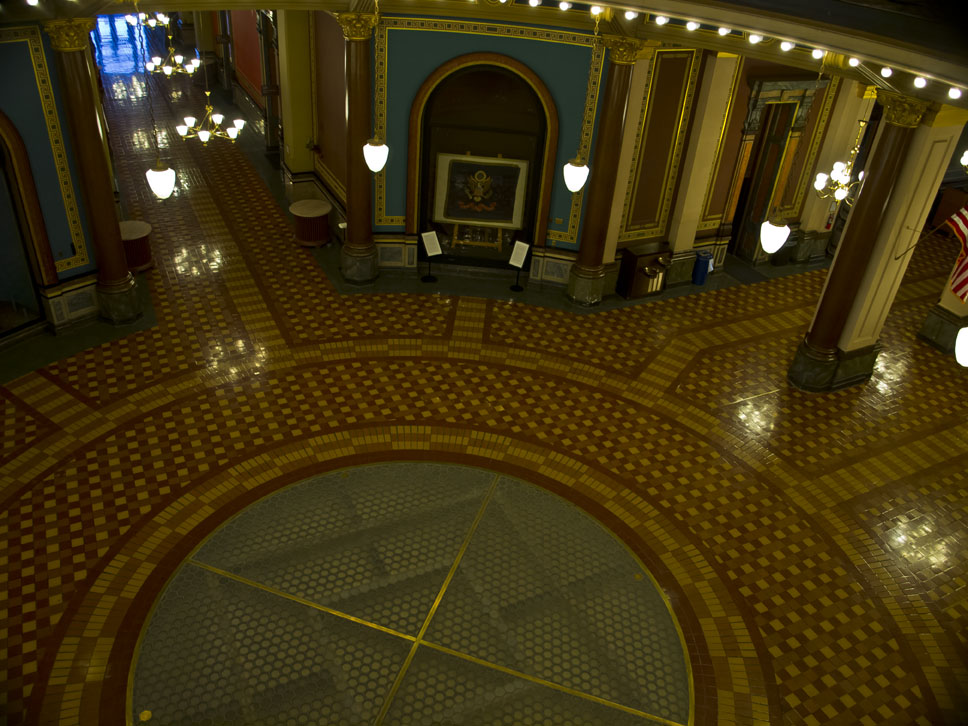 “Twenty-nine types of imported and domestic marble were used in the interior; and the wood used—walnut, cherry, catalpa, butternut, and oak—was nearly all from Iowa forests.”2 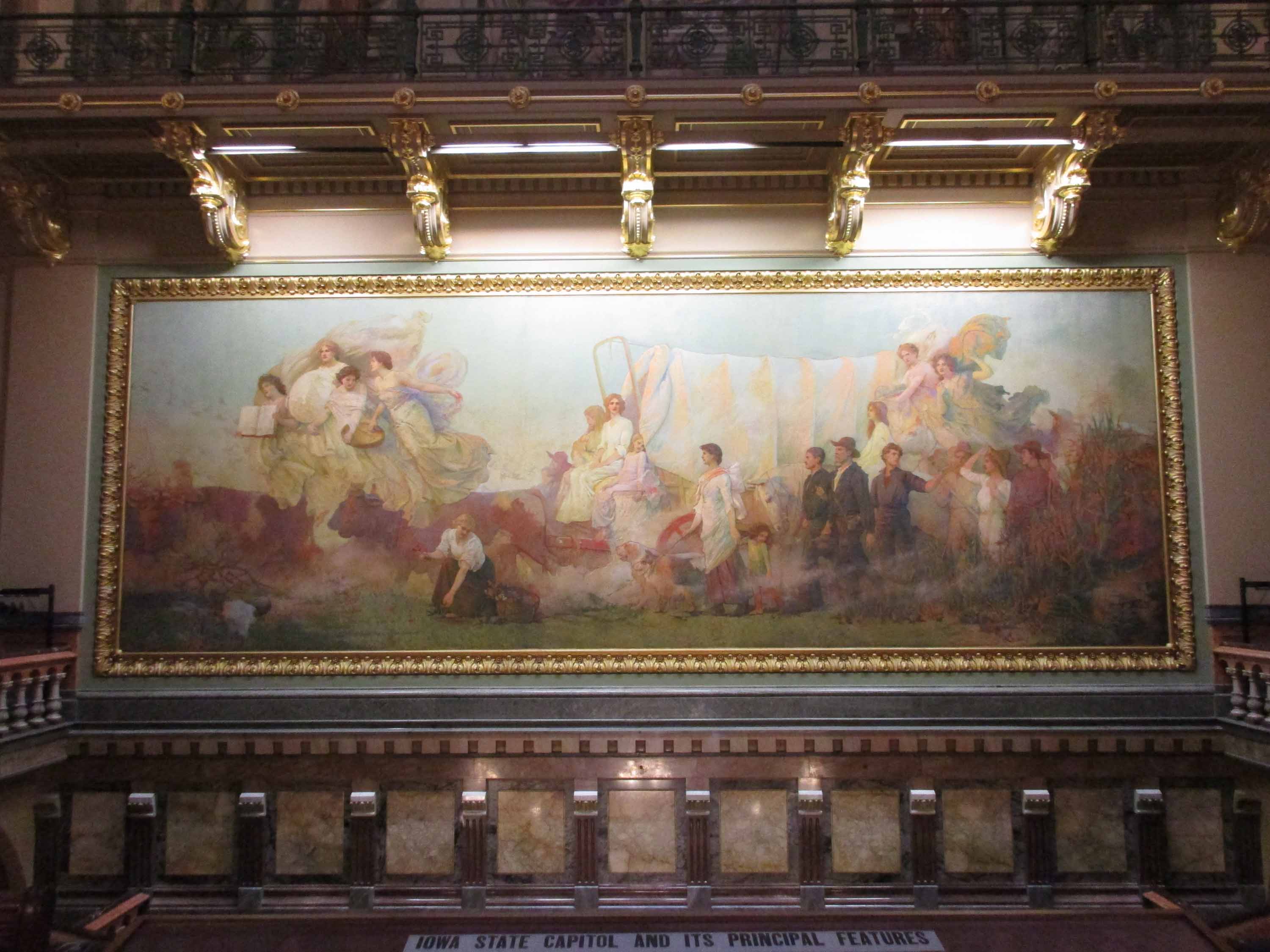 The staircase mural Westward (above) is a massive work that is “a symbolical presentation of the Pioneers led by the spirits of Civilization and Enlightenment to the conquest by cultivation of the Great West,” according to its artist Edwin H. Blashfield.2 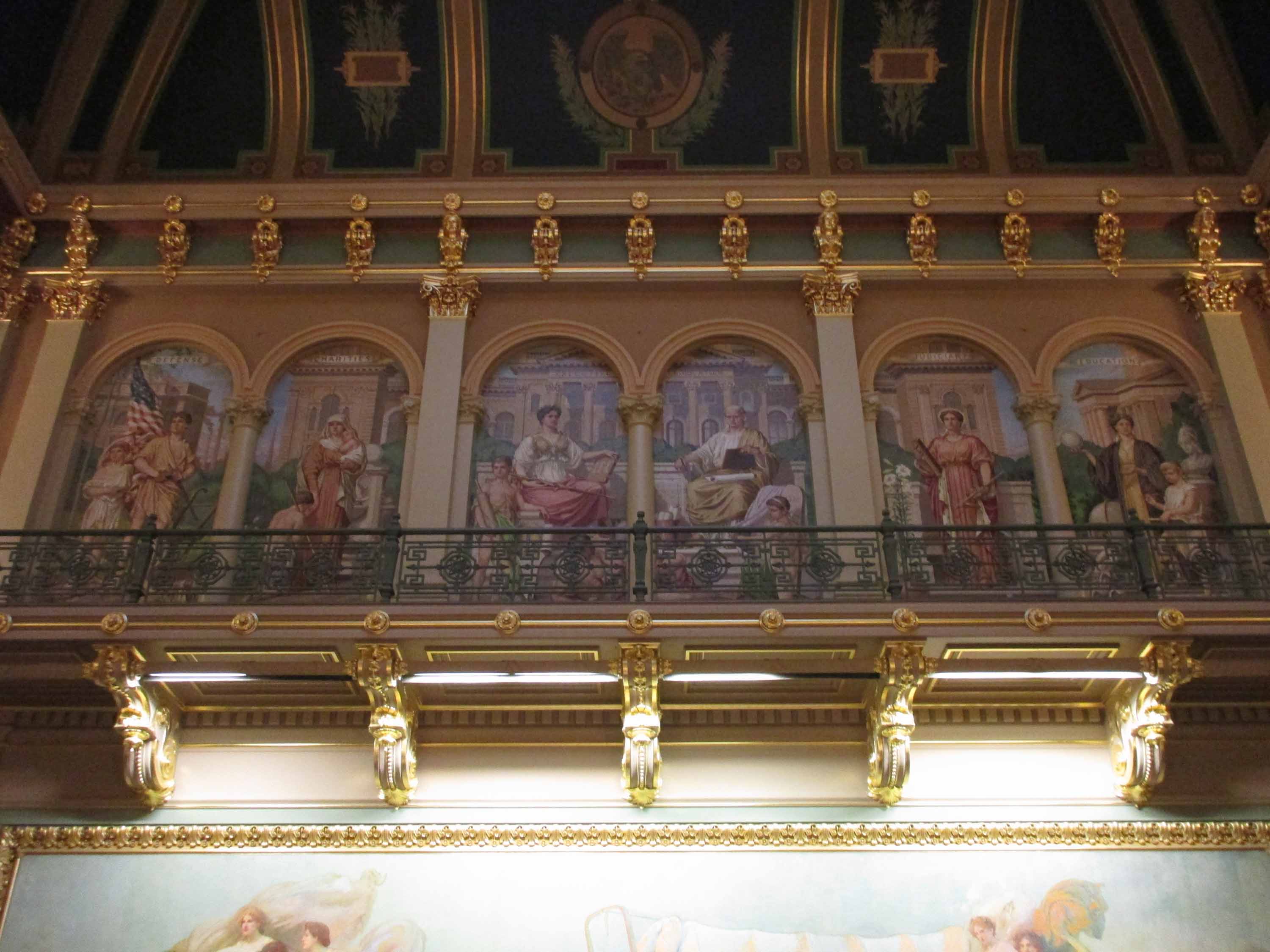 Directly above Westward is a series of six mosaic panels that depict Defense, Charities, the Executive, the Legislative, the Judiciary, and Education. The scale is hard to show in a photo, but my modest 5’ 6” height is barely at waist-level of the seated figures.

If you can’t make it to see her in person all the way out in Los Angeles, you can see a scale model of the USS Iowa battleship. For my history buffs, the Iowa “was the only ship of her class to have served in the Atlantic Ocean during World War II” 2 and once transported President Franklin D. Roosevelt. 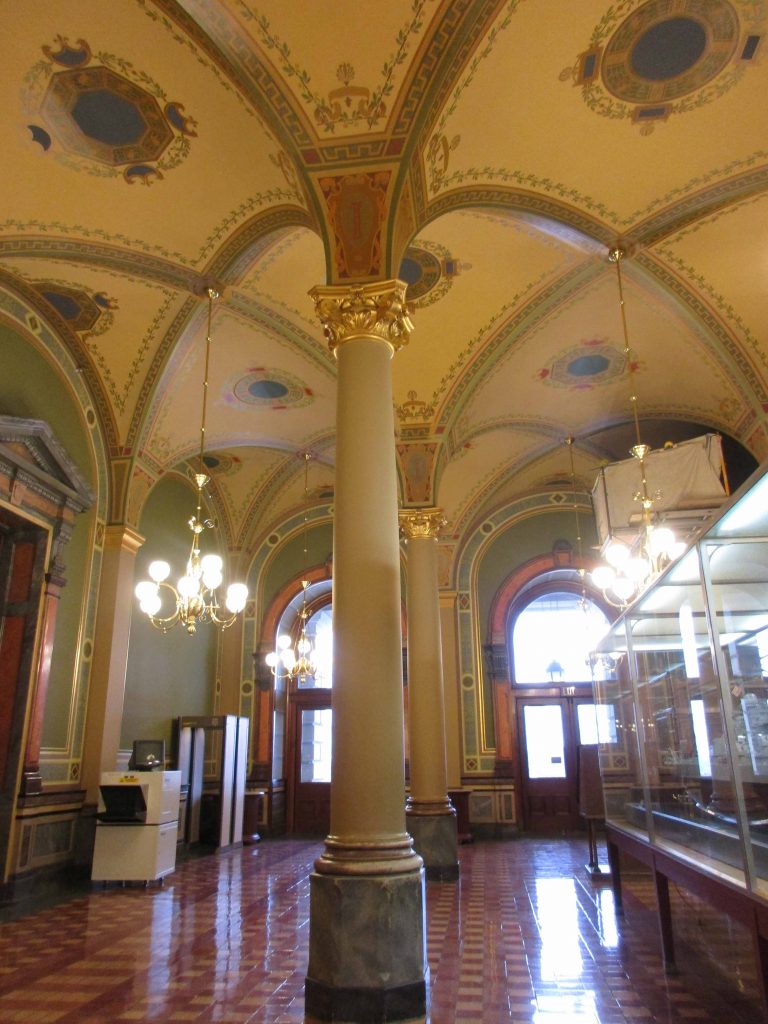 There are a dozen statues around the rotunda as well as eight lunettes, all of which symbolize the core tenants of civilization. 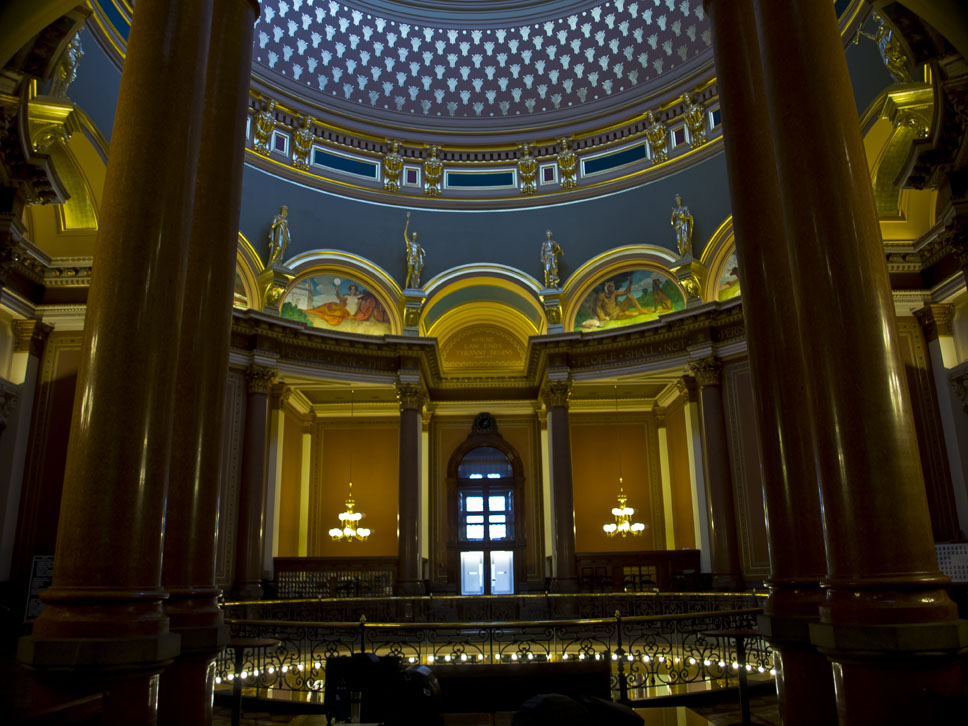 Perhaps some people might think the building is gaudy, though I humbly disagree, and to be fair, NO ONE builds in this style. Even its 1976 National Registry application admits that “Throughout the interior the Statehouse is decorated with a richness that is exceptional even considering its Mid-Victorian origins.”3 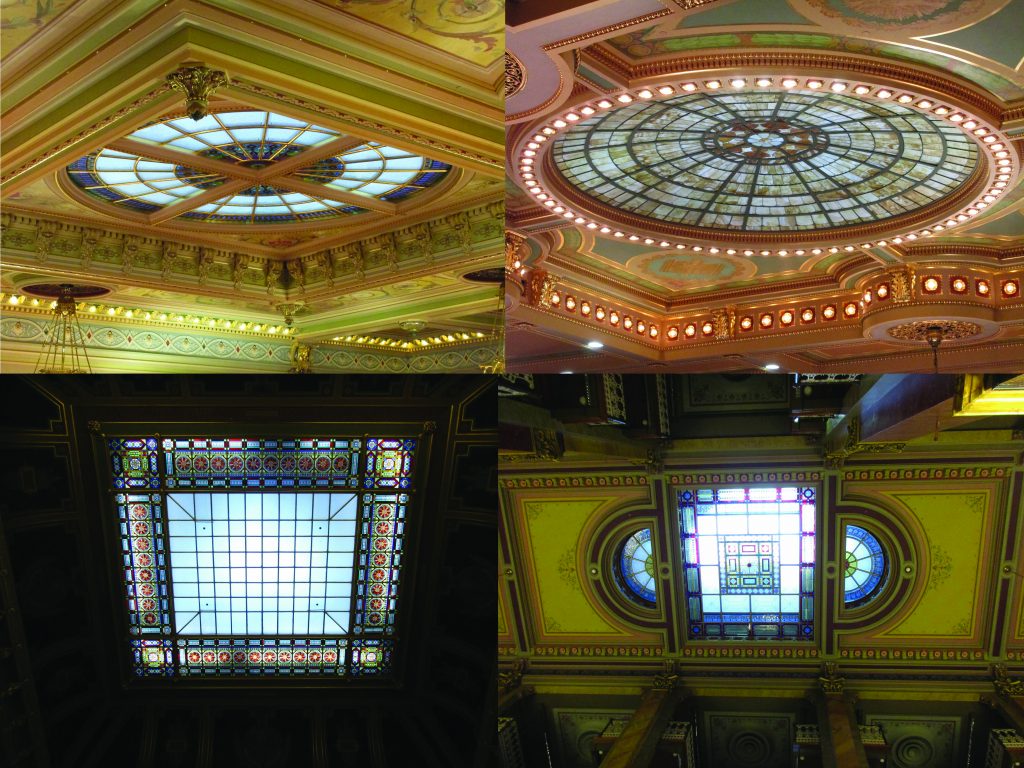 A sample of the stained glass ceilings 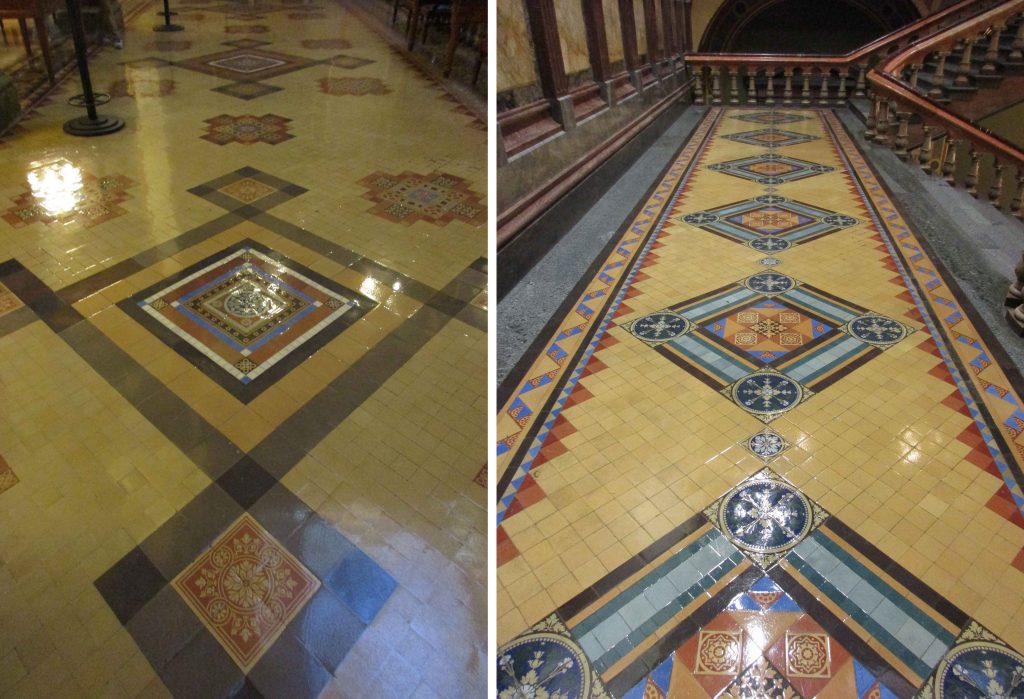 Some of the sumptuous encaustic (painted cement) tiling

And yet the Iowa State Capitol constantly ranks on lists by The Thrillest, Curbed, Huffington Post, and Attractions of America as one of the most magnificent capitols. Beauty is in the eye of the beholder, indeed.

So many beautiful styles of chandeliers and lamps

As a wordsmith, I am always intrigued by the quotes we choose to display on buildings. And no, I’m not talking about those “Live, Love, Laugh” stickers that are so popular right now. I’m talking about the words our forebearers have painstakingly carved into granite, painted on high walls, and etched into wood. Quotes that are meant to inspire the masses and reflect the attitude of a “government of the people, by the people, for the people.” 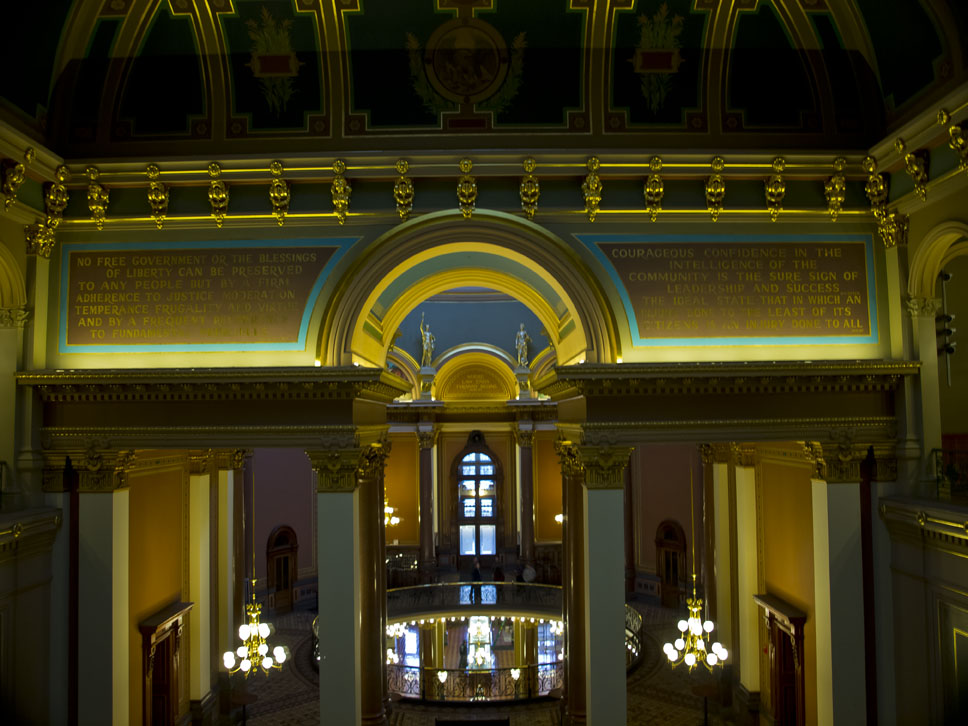 This is what the State of Iowa wishes to say to its people:

“No free government or the blessings of Liberty can be preserved to any people but a firm adherence to Justice, Moderation, Temperance, Frugality, and Virtue and by a frequent recurrence to fundamental principles.” – Patrick Henry, American statesman

“Courageous confidence in the intelligence of the community is the sure sign of leadership and success” – G.W. Curtis, American writer 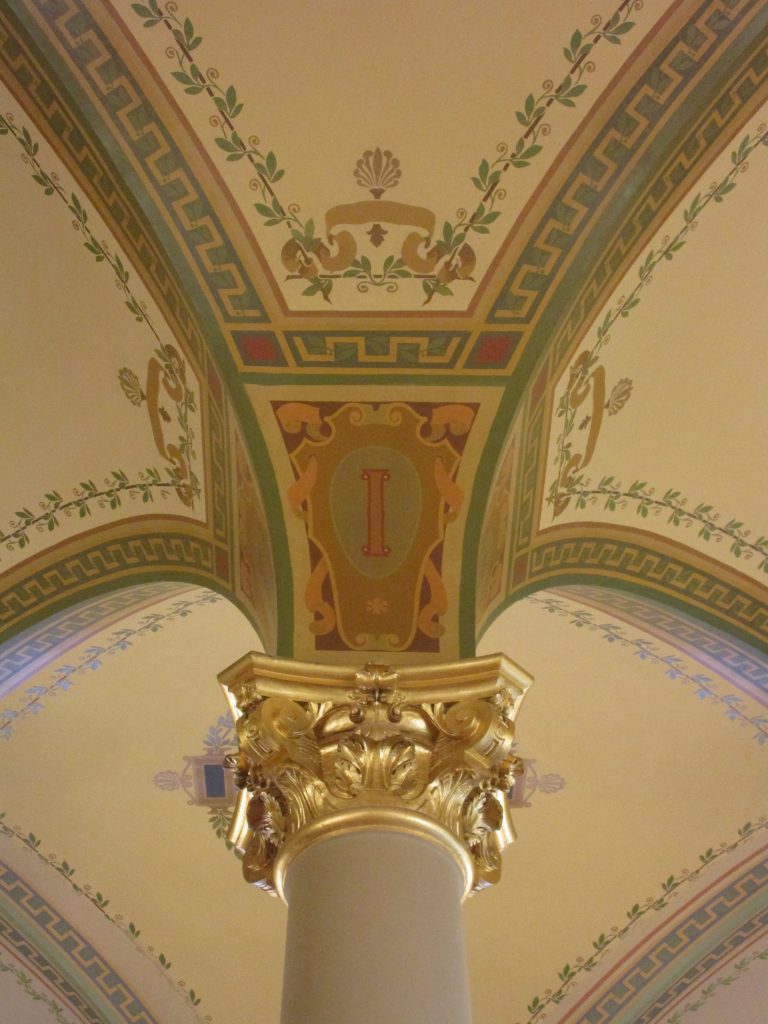 The next time you find yourself in a government building, keep your eyes peeled for quotes like these and take the time to reflect on their meaning. 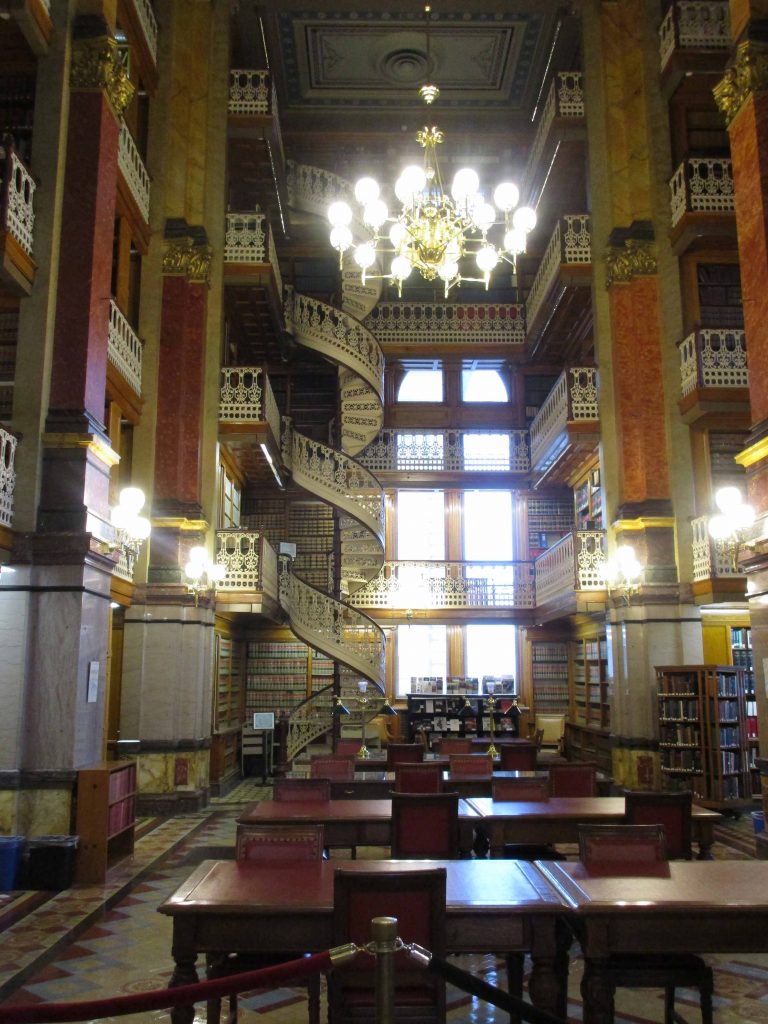 Unsurprisingly, my favorite part of the capitol is the State Law Library. The room’s majesty is attributed to the wrought-iron spiral staircases and balconies, ornate ceiling, multi-story shelves, and gleaning marble columns. 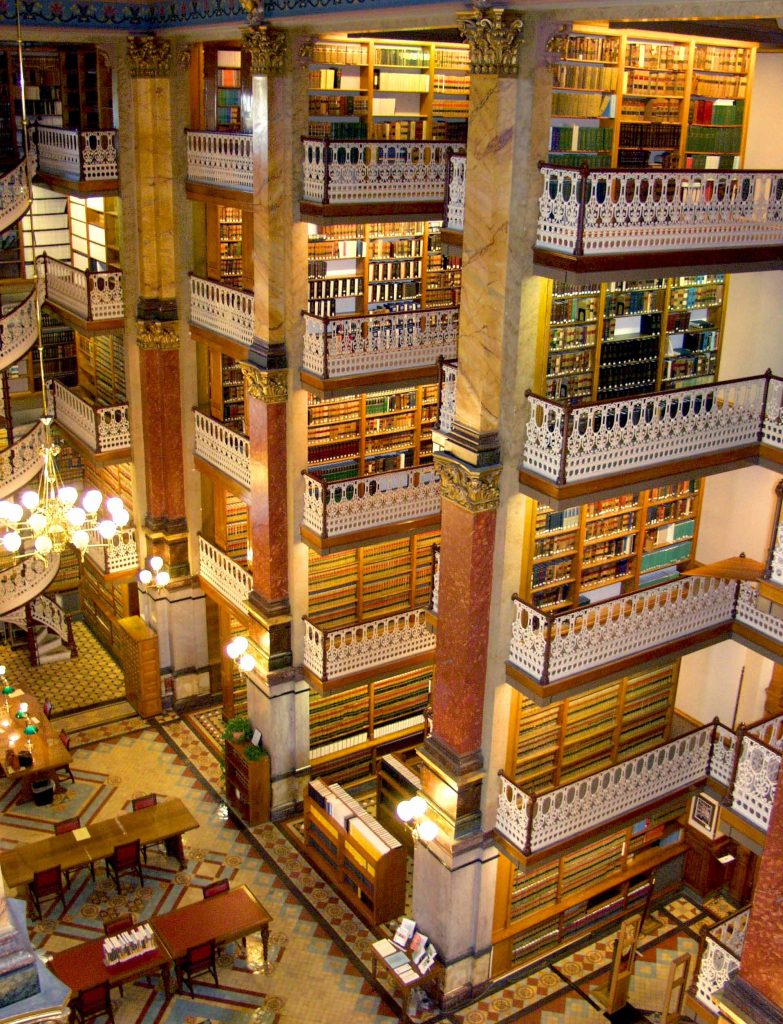 Credit to the State Library of Iowa

According to its National Registry3, the library was based on “Piranesian spacial complexity.” I will defer to the Met Museum of Art for this excellent overview, but you’ll probably recognize this style of architecture instantly from the stretches. I would be positively distracted if I attempted to read here!

Impressively, this is still an active, working library that “boasts just over 105,000 volumes, many of which are rare, and important for their unrivaled historical value. Some of the more interesting items include a unique assortment of Roman and English law dating back to the 1530’s, pre- and post-Colonial America materials, and the original codes of the confederate states of America.”4 Thanks to digitization, the public can access the majority of the collection through via legal database subscriptions such as Westlaw and Lexis.

This is a long post (thank you for reading until the end!), which made me wonder why I am so passionate about our capitol’s architecture. Upon reflection, I decided that what I adore about this building is that it both embodies and defies the modern stereotype of “Iowa Nice.” 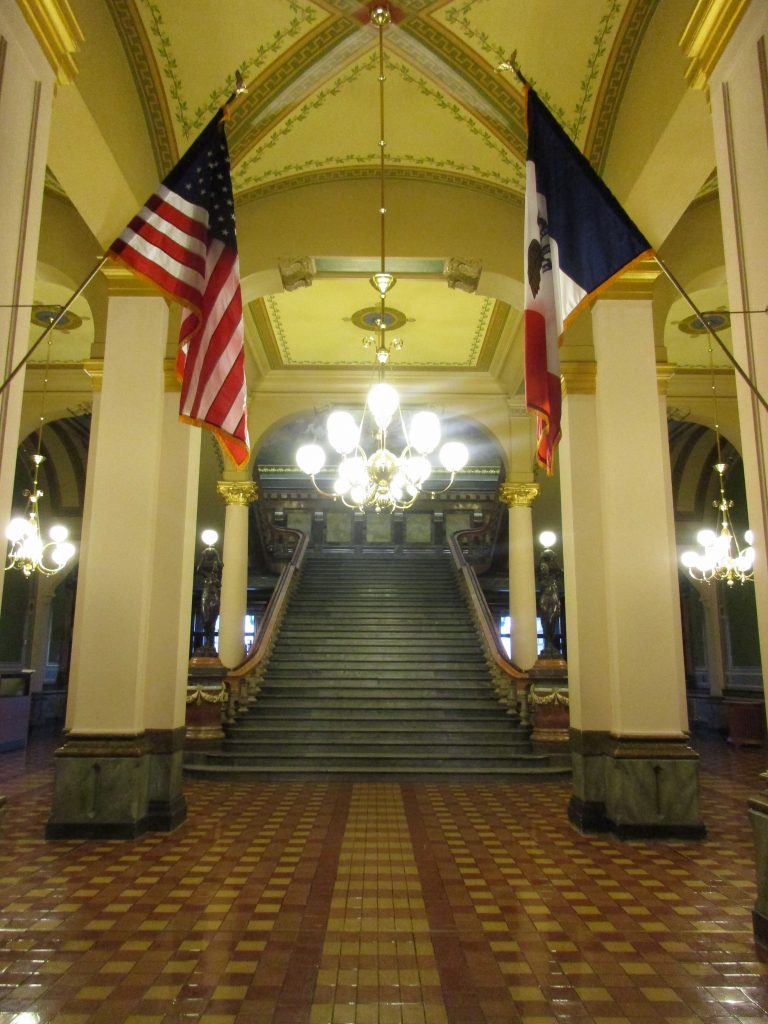 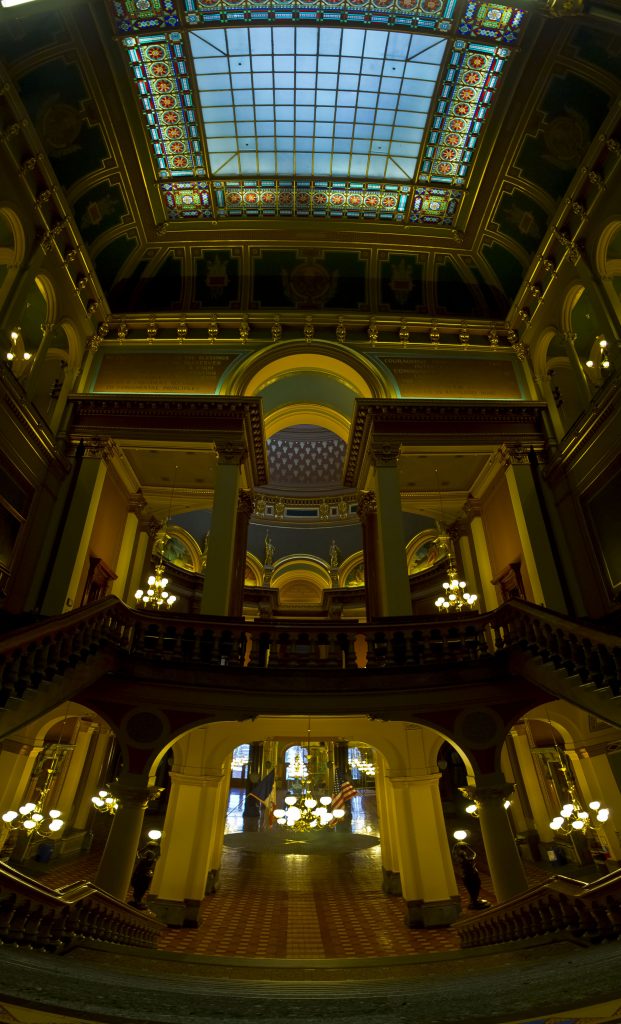 “The almost palatial decoration, inside and out, contrasts sharply with its function as the seat of a rural, republican government. However, such a structure was in keeping not only with contemporary architectural enthusiasms but with people’s pride in their system of government and a belief that its workings should be respectfully housed.”3

What is your favorite capitol building?

All photos personal unless otherwise indicated. 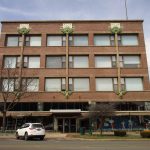 A Louis Sullivan That Defied The Wrecking BallUncategorized 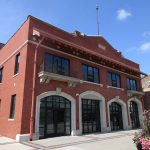