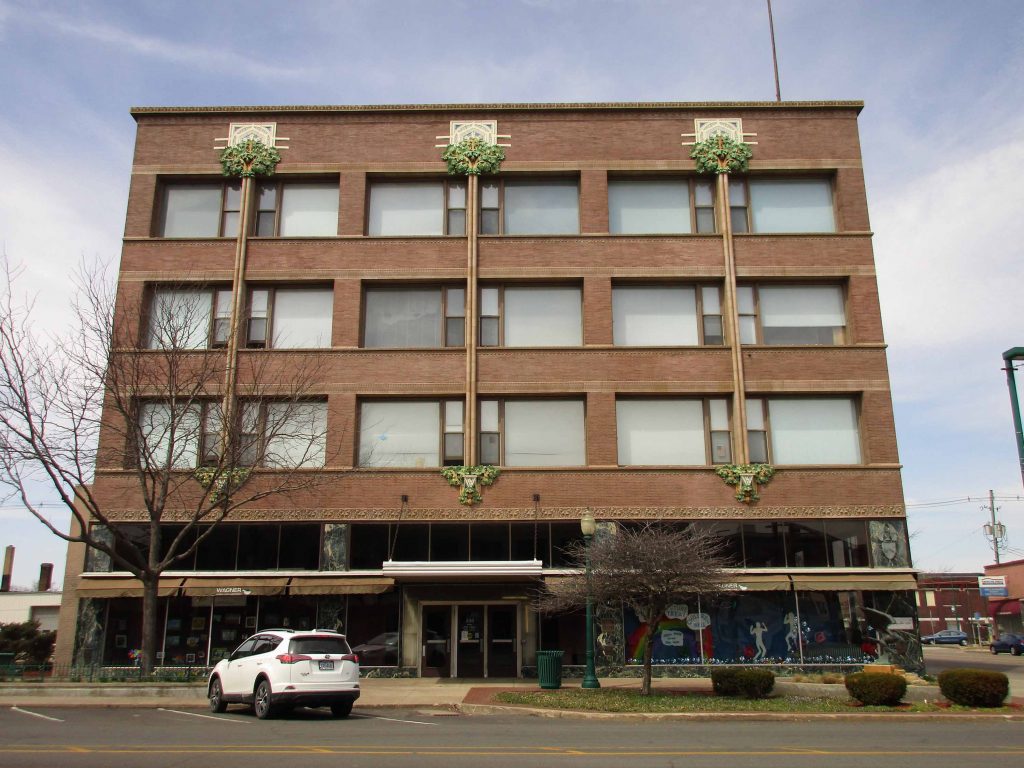 Architectural tourism is one of my favorite pastimes. All it takes is one building on the Historic Register and I have the perfect excuse for a road trip. You can learn so much about a city by the types of buildings still standing. I visited Clinton, IA specifically to see the Van Allen Building, which was designed by Louis Sullivan in 1914. Its beautifully preserved and utterly unique facade is worth the drive.

An Explosion of Ornamentation

It seems like every major town in Iowa has at least one iconic building that has been threatened by demolition numerous times. In Mason City, it’s my beloved Park Inn, Cedar Rapids has many but I’m partial to the Paramount Theatre, and in Clinton, it’s the Van Allen Building. It’s the same story told over and over: a now-famous architect is commissioned by a local entrepreneur, the business has a respectable run for a number of years until moving or folding, the property then sits empty for a depressing amount of time, talk of demolition starts despite vocal opposition, a foundation is formed to save the site, and about a decade later, the building is restored and given new life. Such is the trajectory of the stately Van Allen Building. 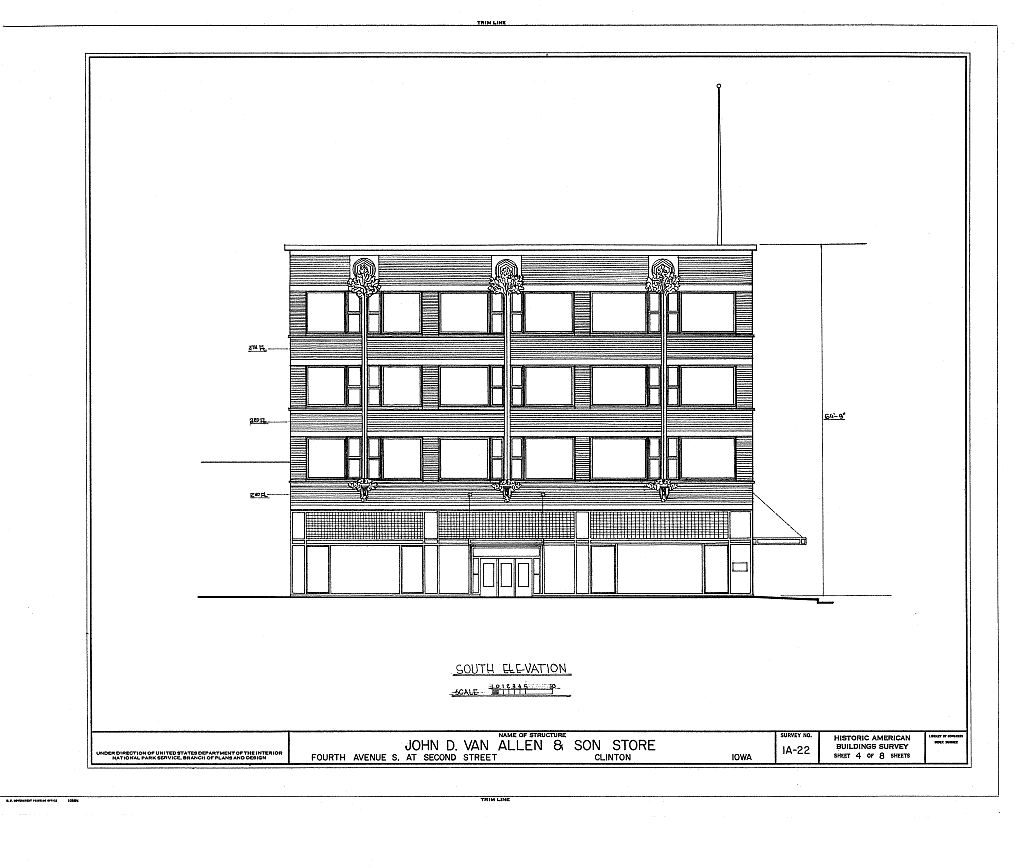 Louis Sullivan left a large architectural legacy throughout the Midwest, notably in Chicago where his firm was located. He is credited for developing the first skyscrapers as well as being a mentor to a young Frank Lloyd Wright. His design style is notable for its use of organic ornamentation on both the exterior brickwork and interior detailing. 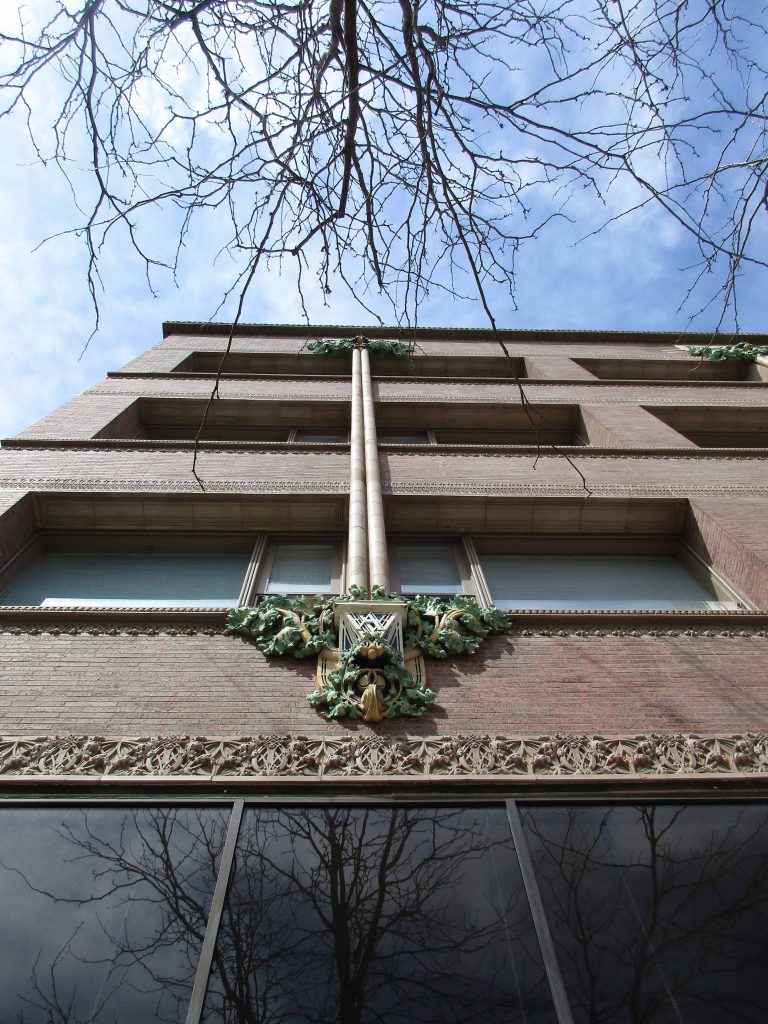 The Iowa Architectural Foundation provides this concise description for the Van Allen Building:

The exterior has brick spandrels and piers over the structural steel skeletal frame. Terra cotta is used for horizontal accent banding and for three slender, vertical applied mullion medallions on the facade running through three stories, from ornate corbels at the second-floor level to huge outbursts of vivid green terra cotta foliage in the attic.1 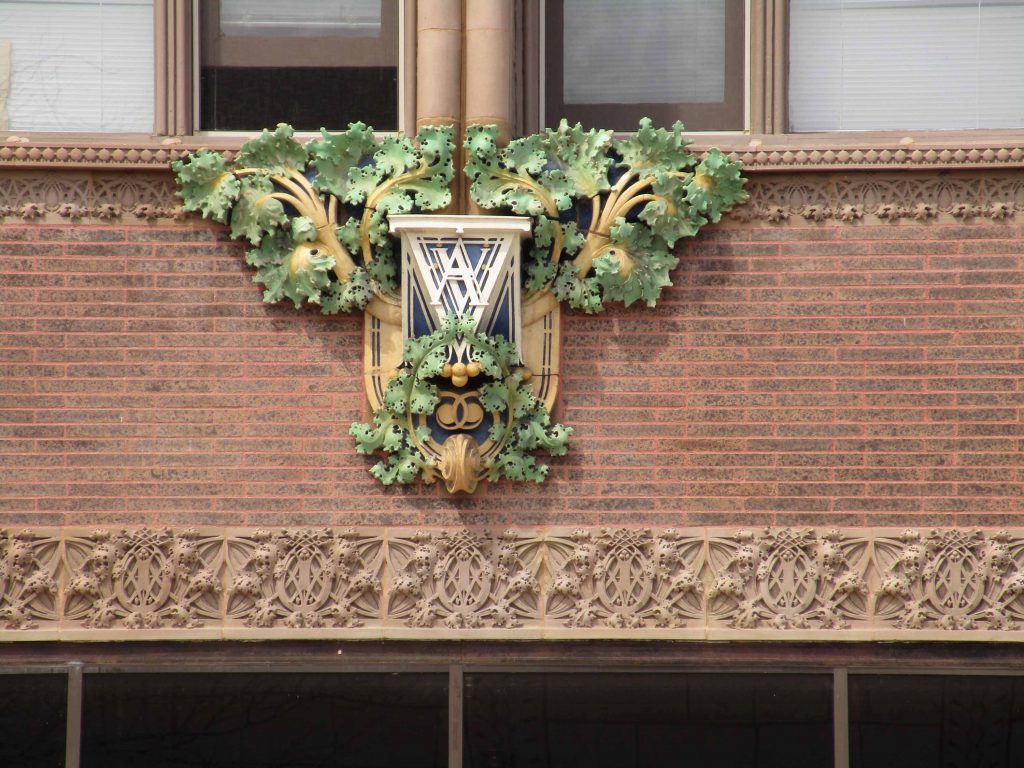 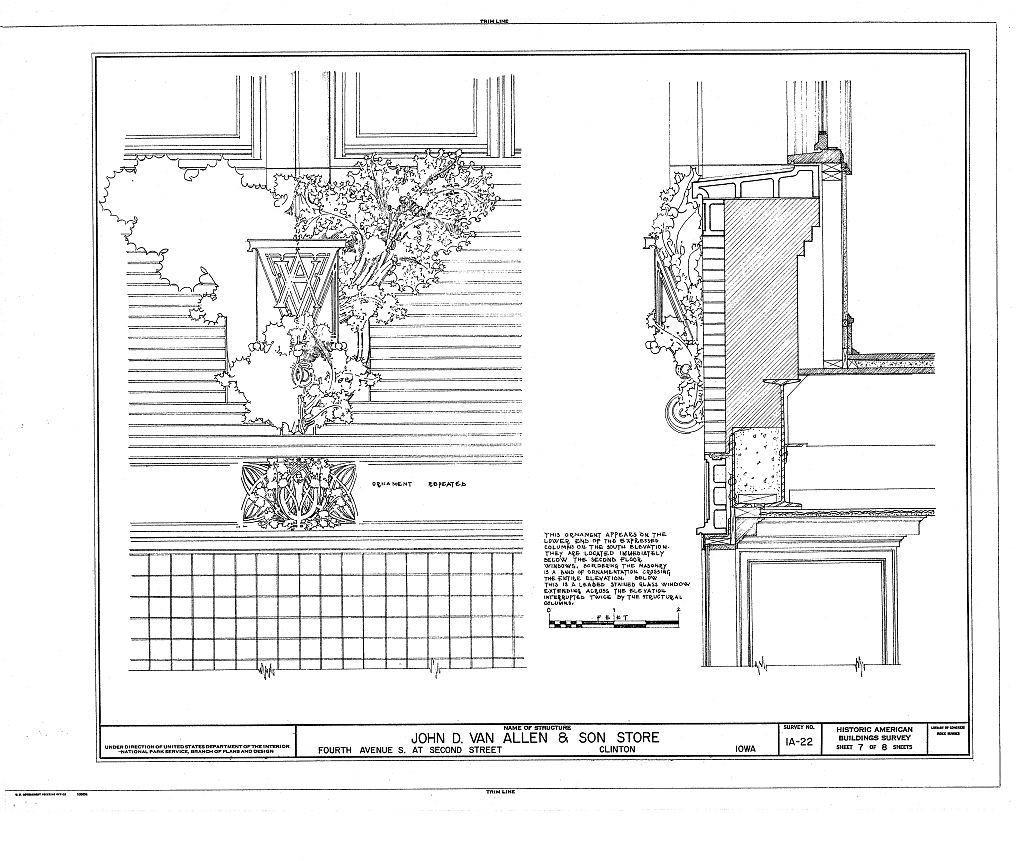 These decorative accents are not only visually stunning, but they also create an optical illusion that the building is taller than its modest four stories. The finial decoration is paired with blue-and-white tiles in an Art Nouveau style, which reminds me of the framing used by Alphonse Mucha in his prints. The overall ornamentation is unusual in its coloration, which is easily visible on overcast days. 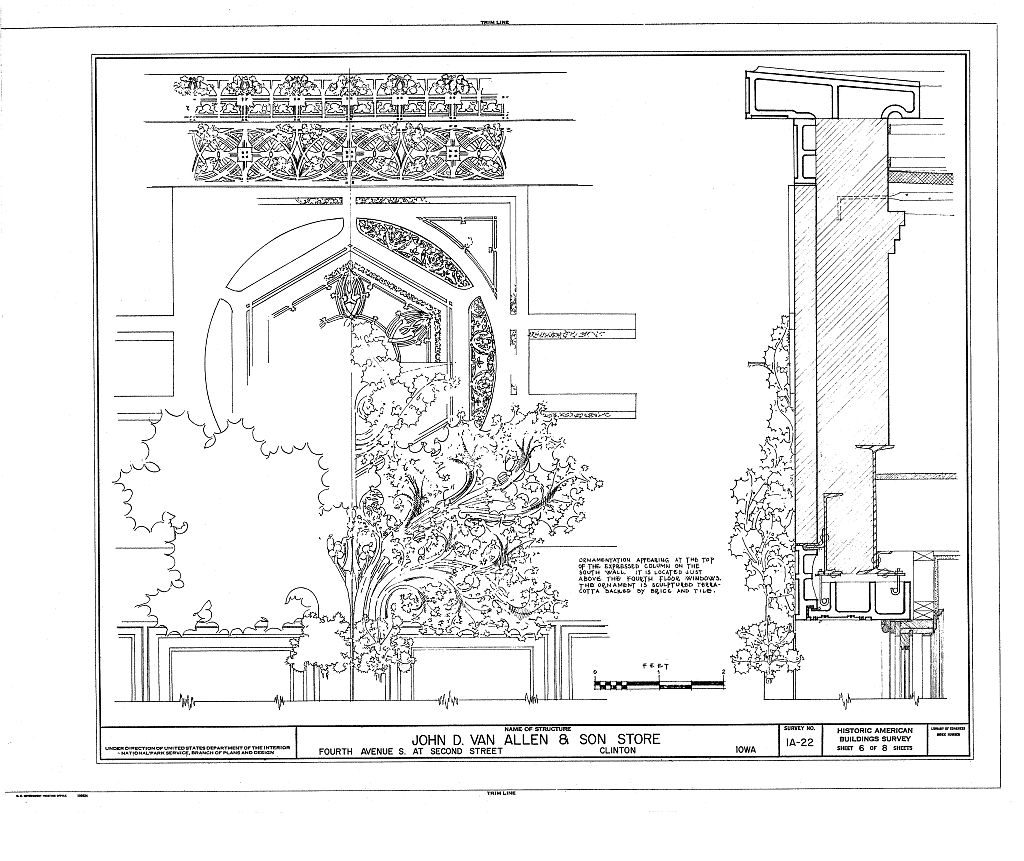 A Bygone Era of Retail

Can I confess how much fun I had researching this building? Thanks to the amazing volunteers at Clinton IAGenWeb, I found a cache of newspaper articles about the Van Allen Building spanning from the beginning of its construction in 1913 to its rebirth in 2003. I was particularly tickled by this clip from a 1914 article in The Clinton Herald:

“Clinton’s Shopping Palace” or “Shoppers’ Paradise” might well designate the splendid new merchandising establishment of John D. Van Allen & Son with its modern facilities for comfortable shopping, its rest room, day nursery, supervised play room for the children while mother or father or both are bargain hunting, its well lighted departments, pneumatic cash carrier service, automatic air changing fans, elevator service, free telephones, closely departmentized system, variety of wares, drinking fountains, fire protection and a thousand and one other things that make it a place of enchantment for the shopping public.2 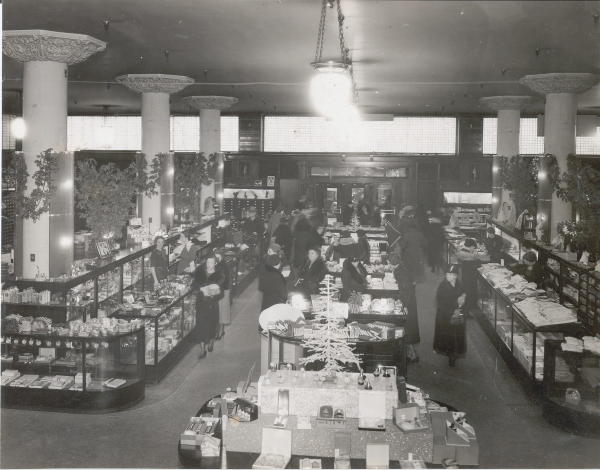 My truly nerdy readers will undoubtedly appreciate how the same article goes on to describe the building’s mechanical wonders. Thank goodness we have better filters than cheesecloth today!

The remarkable purity and cleanliness of the air, no matter how crowded the store may be, is noticeable. It is due to the fact that in the basement is a fan room equipped with apparatus, which takes fresh air from outside the building, filters it through double strength cheesecloth screens and distributes it about the building at the rate of 15,000 cubic feet of fresh air every minute, giving a complete change of air every fifteen minutes on the main floors and every eight minutes in the basement. An exhaust fan on the fourth floor draws all of the dead air from the toilets and various rooms throughout the building.2

I was unable to visit the first floor of the building but snuck this photo through the glass of the entryway doors. The glimpses of these columns are tantalizing! 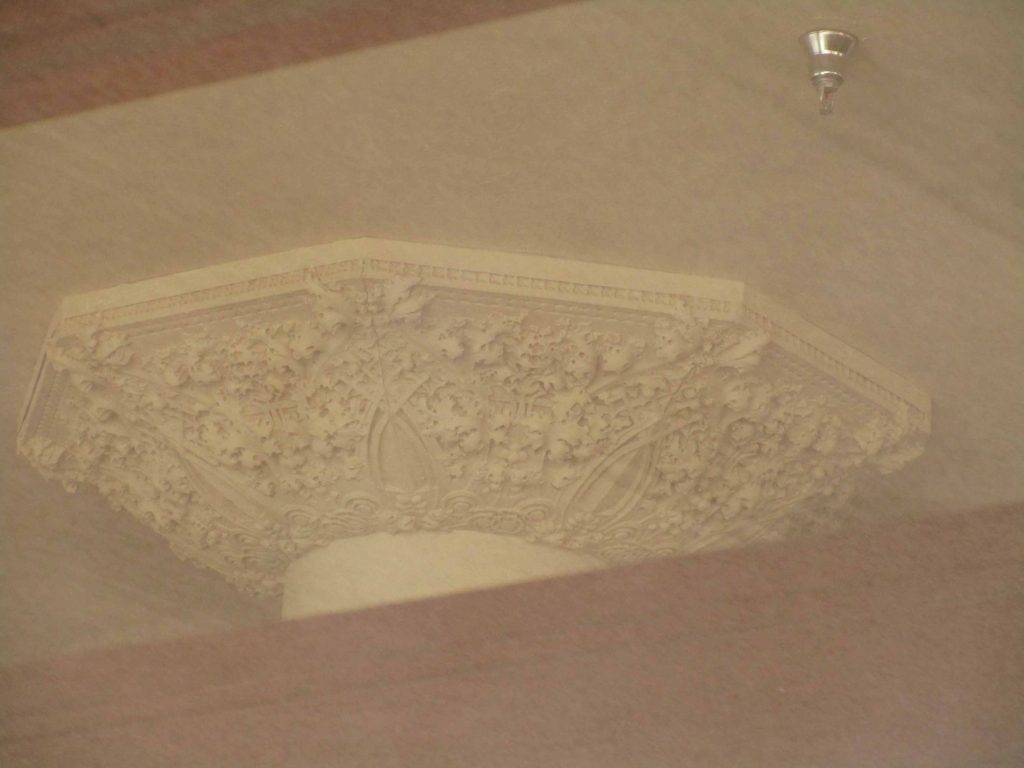 A Story of Adaptive Reuse

Why save a structure like this? Because buildings tell stories. This one speaks to the rise and fall of downtown retail activity. It shows how being designated a National Historic Landmark does not protect a building from demolition (only a local city code can prevent that). It demonstrates how a building can be adapted for modern use while retaining its historic look.

The structure sat empty after the department store Von Maur moved out in 1987.  After two years of vacancy, a foundation was formed and the city purchased the site to lease it back to the group. It was finally rescued in 2001, renovated to convert the top floors into 19 apartments, and has provided downtown living since 2003.2 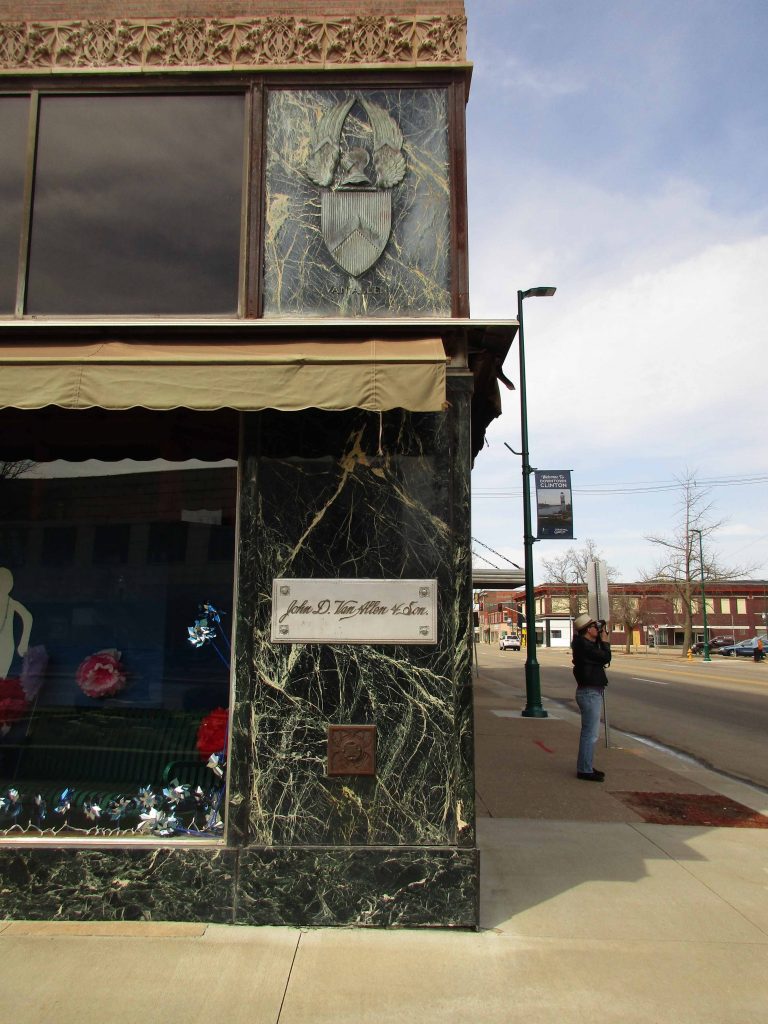 As quoted in a Quad-City Times article, “Community Housing Initiatives president Doug LaBounty said urban renewal projects such as the Van Allen proposal usually are slow to pull together, but worth the wait. He said the company partnership could build the same number and size of apartments in a new structure for $400,000 to $500,000 less – but saving an irreplaceable landmark means a bigger investment, and more time to enjoy it. It’s a solid brick structure. This building could stand for another 500 years, where new construction doesn’t last that long,’ LaBounty said. ‘They just don’t build them like they used to.’”4 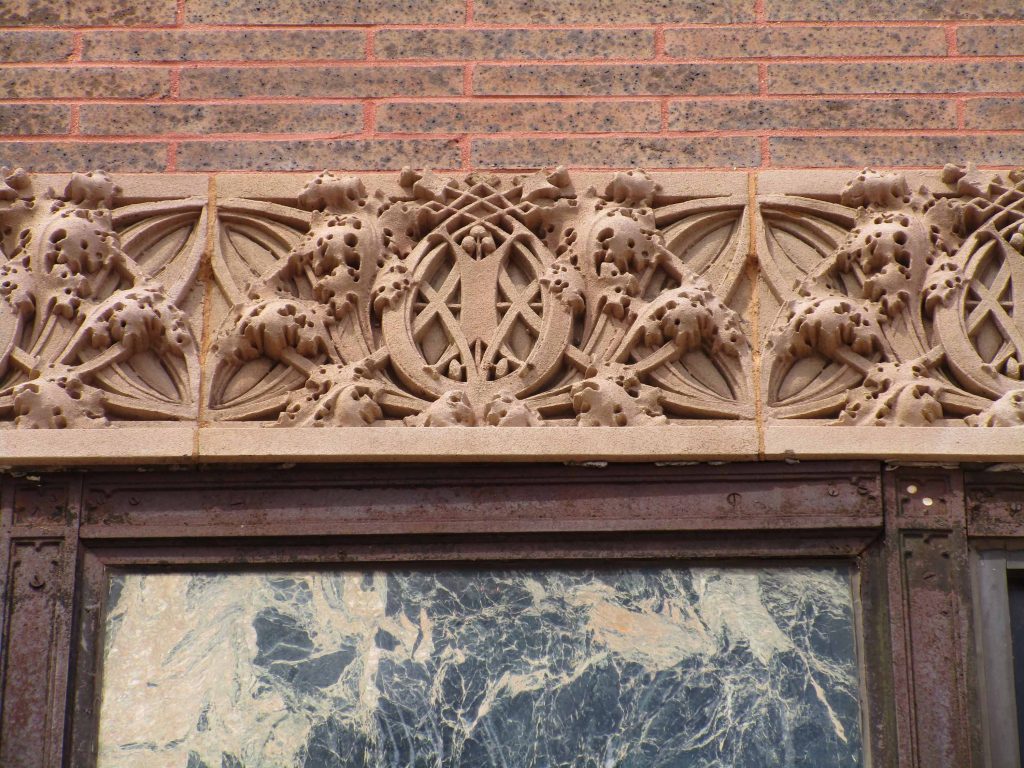 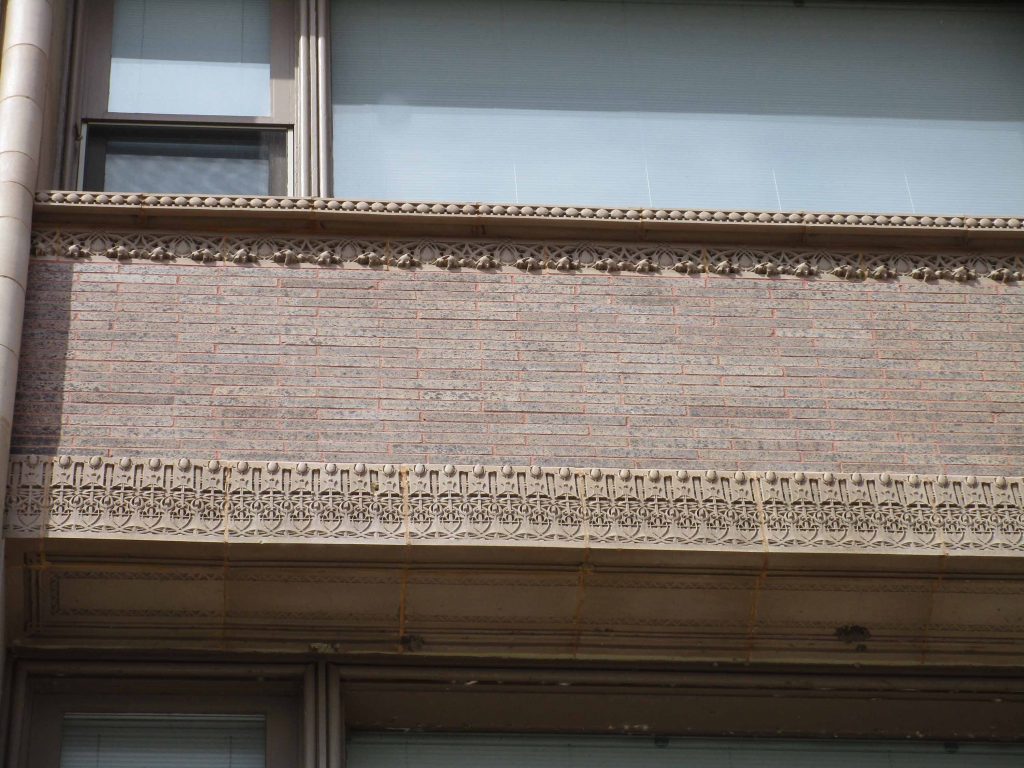 The Van Allen Building also serves as an example of Sullivan’s work later in the twilight of his career. There are five Sullivan buildings standing in Iowa: both the People’s Saving Bank and Saint Paul’s Church in Cedar Rapids, the Merchants’ National Bank in Grinnell (on my summer travel list!), and the Henry Adams Building in Algona.5 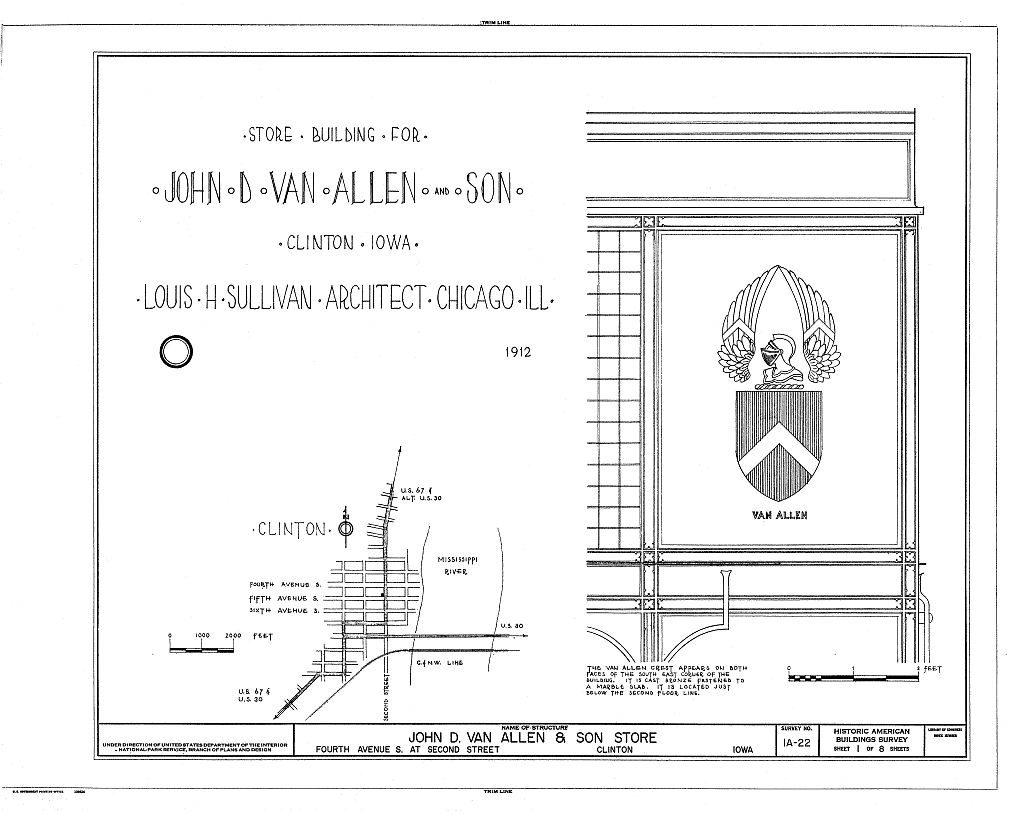 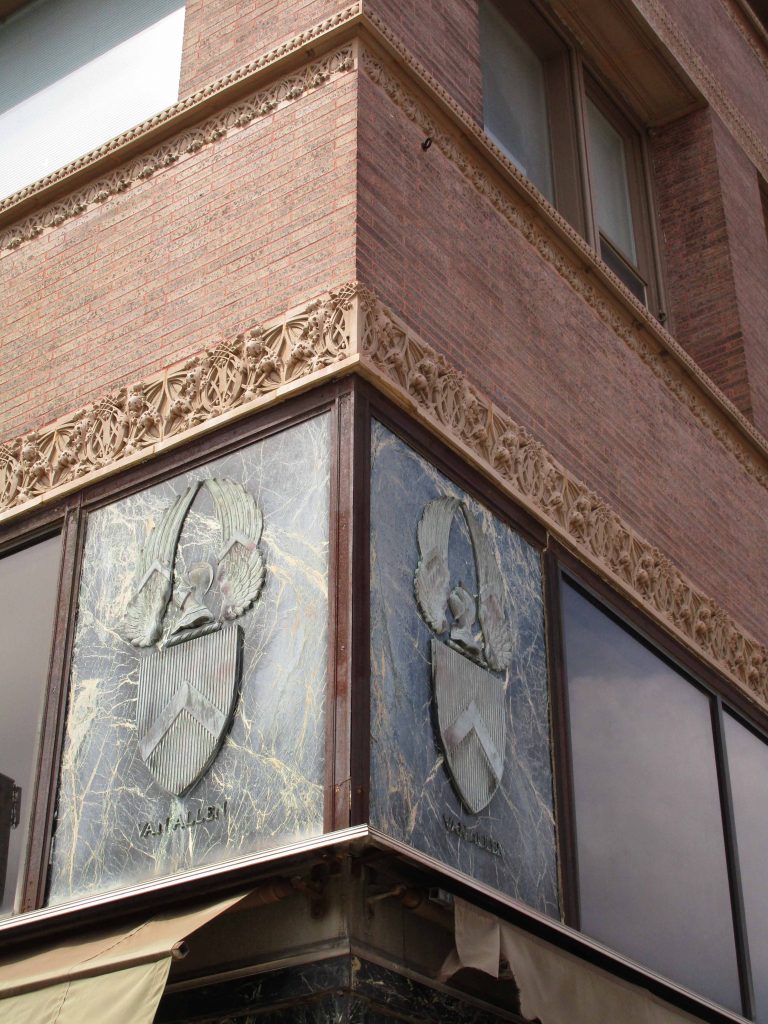 I couldn’t agree more with the original nomination form submitted in 1975 to the National Register of Historic Places:

“Although this building is not one of the ‘jewel box’ banks, the Van Allen store is one of those simple, elegant structures built when the American world of commerce was commissioning Roman Baths and Temples … The Van Allen store, although small in scale, need only be compared to the conventional stores then being constructed across America, to realize that even in his last years, Louis Sullivan was one of our greatest architects.”5 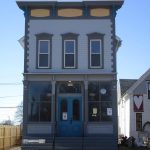 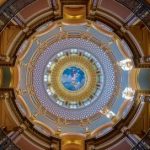